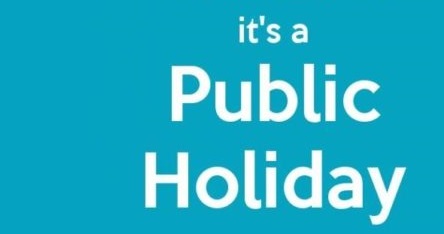 President Akufo-Addo has declared Monday, September 23, 2019, as a Public Holiday to be observed throughout the country.

Because the holiday falls on Saturday which is a weekend, President Akufo-Addo has declared Monday, September 23, 2019, as an Additional Public Holiday.

This was made known by the Ministry of Information.

However, in view of the fact that 21st September, 2019 falls on a Saturday, His Excellency, the President of the Republic of Ghana has by Executive Instrument (E.I)â€™ declared Monday, 23rd September,2019 as an Additional Public Holiday to be observed as Kwame Nkrumah Memorial Day throughout the country.

This is because the President Akufo-Addo government said there were six main independence leaders, not just one.

And many others contributed to securing Ghanaâ€™s freedom as well.Â

In December 2018 a bill was laid before parliament to amend the Public Holiday Act 2001 to provide for three different holidays.

So the President Akufo-Addo in April 2019 approved the Public Holidays (Amendment) Act 2019, (Act).

This led to the holiday on 21 September been renamed as Kwame Nkrumah Memorial Day, with a new public holiday on 4 August added to the national calendar.

Nkrumah was prime minister just before and after Ghana gained its independence from the British Empire in 1957. And he was the major force pushing for independence with the most influence. He then became the nationâ€™s first president upon the passing of a new constitution in 1960.