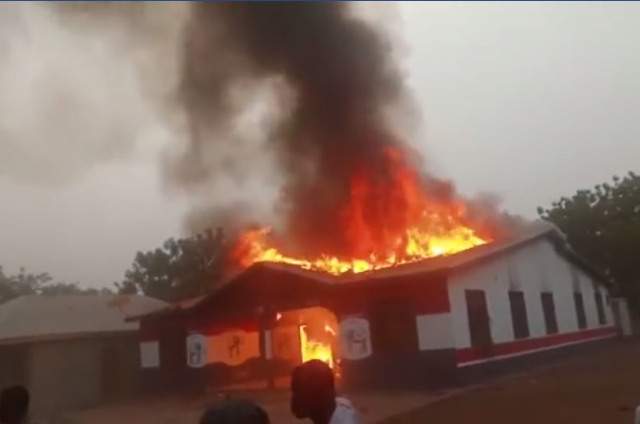 The Tamale Regional Police has apprehended an NDC communications officer for his alleged involvement in the burning of an NPP office at Salaga in the Northern Region.

He was apprehended together with 19 others. The arrest was done in a dawn swoop by a joint Police and military team on Tuesday, November 25 2019.

The suspects are currently at the Tamale regional police command.

According to reports, the NDC Communicator was arrested because he was seen inciting an angry NPP youth who burnt down the party office months ago over the naming of Damango as the capital for the Savannah region.

Speaking to Starr FM today November 26 2019, head of NDC communications for the Savannah Region Malik Sabintari said the party will resist attempts to intimidate them.

“I don’t understand why the police will pick up the NDC communicator from Salaga and move him straight to Tamale. Rumours have it that they want to fly him to Accra. In the video that went viral, those who were seen torching the building mentioned that they were members of the NPP and that their leaders disappointed them and that was why they took that action.

“What kind of investigation will happen in Accra when the alleged crime happened in the Savanna Region. At 2am the entire household of the communicator was surrounded by the police together with some National Security Operatives and he was picked up. I have spoken to the party’s lawyer in the region and we will not allow such intimidating tactics by the government,” he said.