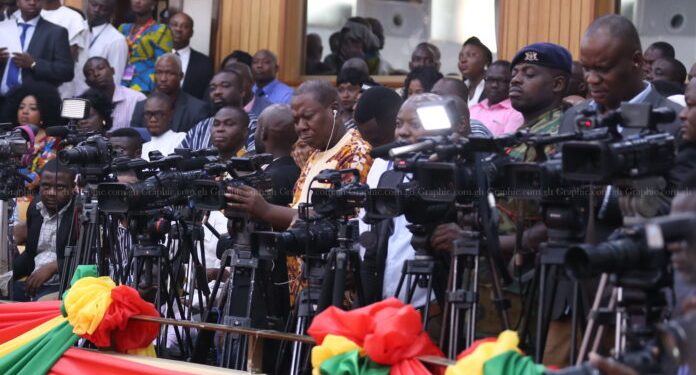 The Parliamentary Press Corps are expected to meet today February 27, 2020, over the Speaker of Parliament Prof. Mike Ocquaye's threats to label journalists as unwanted guests.

This meeting will decide their next line of action after they were given a warning.

The Speaker on Wednesday summoned the Dean of the Parliamentary Press Corps and the Director of Public Affairs of Parliament over the conduct of journalists at Tuesdayâ€™s sitting.

The summon followed a complaint from the Majority Leader, Osei Kyei-Mensah-Bonsu to the effect that journalists abandoned proceedings in the House and gave audience to the Member of Parliament for Ellembele, Emmanuel Armah Buah who had concerns about the Energy Sector component of the State of the Nation Address.

But Dean of the Parliamentary Press Corps, Nana Agyeman Tenkorang who was unhappy about the Speakerâ€™s directive said, todayâ€™s meeting will among other things find a lasting solution the matter at hand.

â€œI find the comment unfortunate because I thought the matter had been dealt with so I was surprised when it was raised again. Sometimes if parliamentary proceedings are ongoing, I receive a memo from the Public Affairs Directorate that a delegation outside is going to pay a courtesy call on the Speaker. We abandon the work that we are doing in the Chamber for us to cover the courtesy call. So why do they see nothing wrong with that but see the interview with Mr. Buah as something that is unheard of.â€

â€œI have made the press aware that we are going to have a general meeting [today] to get the views of my colleagues. The Director of Public Affairs will also come for the meeting for us to know how we can go forward together,â€ he added.

Speaker's decision not to gag journalists

Public Affairs Director of Parliament, Kate Addo said the decision of Speaker is not to gag journalists in their work in the House.

Kate Addo said that the main issue is to find common grounds on how journalists are to operate in Parliament.