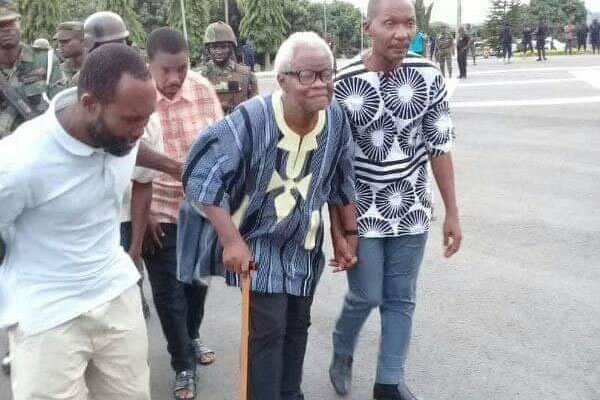 Private legal practitioner, Martin Kpebu has asked the National Peace Council to engage the leaders of the secessionist group in the Volta Region known as Homeland Study Group.

According to Martin Kpebu, the Peace Council must engage them for the leaders of the group to abort their plans.

"The way they keep on going I have been thinking that perhaps the Peace Council should be brought in to engage them, you know the way the laws work, if they are not careful, the fact that this is the second time, the state can decide to prosecute the man, the first one the state left it go and the second time, maybe because it's not a very big group, if it was a very big group which was threatening our national stability, of course, I would have said they should be prosecuted, but we are not treating them with.......we just want to be sure that, look, we've done everything within our power to give them the right education so that if beyond that they insist and in future the state is prosecuting them I'm sure people will not have any sympathy for them..," he said in a Citi FM interview.

READ ALSO: To go or not to go, to Togo!” The sights and sounds of Koku and the separatists

The Homeland Study Group Foundation which intensified its campaign to secede the Volta Region and parts of the then Northern and Upper East Regions along the eastern border of Ghana into an independent state in 2017 has had its leaders arrested and charged with treason felony on at least two occasions in recent times but the Attorney General discontinued the case.

Mr. Charles Komi Kudzordzi alias Papavi Hogbedetor who is the leader of the group and in his 80s made the declaration at a public gathering in Ho on Saturday, November 16, 2019.

Addressing a cheerful group of members of the separatist movement in the native Ewe language, Papavi Hogbedetor recounted their struggles to restore the independence of the pre-independence Western Togoland territory, a German protectorate which was joined to the then Gold Coast to form the newly independent country, Ghana on March 6, 1957, under circumstances he believes were ”illegal”

The government through the Minister for Information, Kojo Oppong Nkrumah says they are taking steps to deal with the Homeland Study Group Foundation (HSGF) a secessionist group that declared independence for Western Togoland State.

A statement from the Information Ministry said: “state security agencies are taking the necessary measures to ensure that persons involved with the illegal activities are dealt with in accordance with the law.”

“Ghana remains a sovereign state which has not ceded any part of its territory to any person or group of persons,” the statement said.