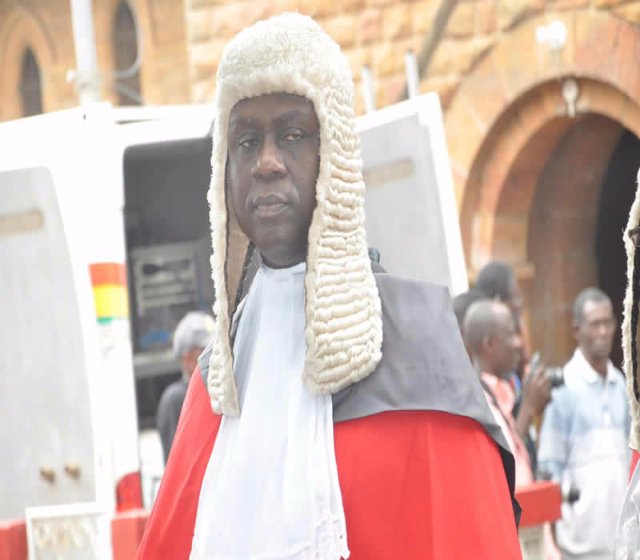 Chief Justice Kwasi Anin Yeboah, Tuesday, urged the public and the Bar to report members of the Judiciary or court staff who make unlawful demands in the discharge of their official duties to the Complaints Unit of the Judicial Service.

â€œNo person is required to pay monies before executing bail for suspects; and you must demand receipts for every payment. When monies are paid to a beneficiary, no court staff is to keep such monies,â€ he warned

He also admonished magistrates and court officials to exhibit a high sense of professionalism.

The Chief Justice said these, in a speech read on his behalf, by Justice Samuel K. Marful Sau, a Supreme Court Judge, at the commissioning of a modern district court at Sowutuom in the Ga Central Municipal Assembly.

â€œThis building symbolises the Rule of Law and as such, the sitting Magistrate is expected to dispense justice without fear or favour, affection or ill will,â€ the Chief Justice declared.

It will serve about 10 communities, including Awoshie, Anyaa, Santa Maria and Kwashiebu and currently those travelling to Weija and Amasaman to seek justice.

The construction of the edifice, which has offices for the recorder, registrar, cashier, bailiff and cells for males and females, among other facilities, began in 2015.

Chief Justice Yeboah also entreated litigants and the Bar to patronise the Alternative Dispute Resolution Programme, connected to the Courts.

â€œThere is no denying the fact that Alternative Dispute Resolution has proven to be speedy, cheaper and less laborious, as compared to the formal adversarial traditional court system,â€ he emphasised.

Commending the Ga Central Municipal Assembly (GCMA) and all the stakeholders behind the building of the court, he reminded other local assemblies of their obligation to continue to provide courtrooms for persons who sought justice at the district level so that their constitutional rights would not be denied.

In was in line with this that some court buildings in the Greater Accra Region were closed down to be given the necessary facelift to operate in a conducive working environment.

Mr. Justice Boakye Yiadom, Deputy Judicial Secretary, said additional staff would be posted to the Court, while the Magistrate, who presided over the Amasaman Court, would sit on cases as his additional responsibility.

Dr. Emmanuel Lamptey, Municipal Chief Executive (MCE), said the commissioning of the court had led to the achievement of another milestone for local government and justice delivery.

Dr. Lamptey explained that the first phase of the project was completed in June 2016 and the second phase in June 2019.

He expressed optimism that the court would fast track cases, especially sanitation-related ones and those of default in the payment of rates.

There was a moot court to give the gathering a feel of what to expect.