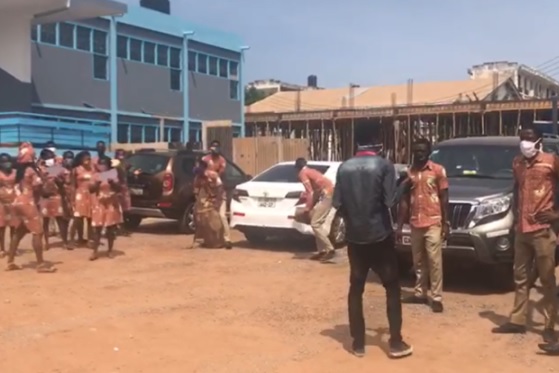 Ministry of Finance has assured students of the School of Hygiene of paying their allowance before September.

Deputy Minister of Finance Abena Osei Asare said their movement from the Ministry of Health to the Sanitation caused the delay in the payment.

According to her, they have rectified it and they will be paid by Septemeber.

"Yes, we have a problem with their allowances remember they were under the Ministry of Health so their movement to the Ministry of Sanitation they miss out on their numbers. When the government was... for the allowances of the health trainees it took recognition of them because they have moved to the Sanitation Ministry they couldn't get what was due them.

"Currently, we are working on it and I believe that before September they will get what is due them."

Students of the Ghana School of Hygiene (GSH) picketed at the Sanitation Ministry on August 17, 2020.

The reason for their action was to register their displeasure for over three years of unpaid allowances.

The students accused the government of deceit and demanded immediate payment of their allowances.

The Ministry in response says it will constitute a Committee to facilitate the release of the monies.

Noah Tumfo, the Chief Director of the Ministry of Sanitation addressing the angry students said the Ministry has begun processes to get these monies paid.

"The Ministry has decided that a Committee be formed with you (students) represented as well. So now we are asking to meet you and get your consent to be part of the Committee. The Committee will be tasked to follow up the concerns of your allowances. We have already sent a letter and the processes have begun"

The students, however, did not buy the words of Mr Tumfo and called on the government to act fast or face their wrath.

They lamented that though they are the highest fee-paying nursing school, they receive no money from the government and still get sacked from examination halls over unpaid fees.

To register their displeasure the GSH wings in Tamale and Ho joined colleagues at Korle-Bu, Accra to demonstrate.

This is the second time students of the Ghana School of Hygiene (GSH) have demonstrated over their allowances this year.