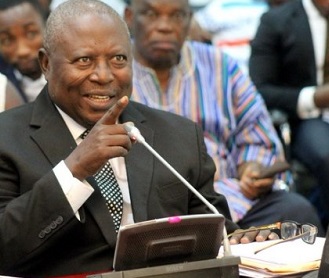 Martin Amidu described the comment of the NDC General Secretary as a hallucination and political lies.

"I now have no option than to be convinced that Mr. Nketia might have been hallucinating when he granted his interview that was subsequently published online. Mr. Nketia, if he was not hallucinating, knew that he was deliberately manufacturing fake news and lying through his teeth to simply satisfy his political constituency. How could he advise and warn me a lawyer of more than 38 years standing with vast public office experience at the time, of the efficacy of the law when I had already accepted the offer."

Read his publication below.

I read in the Ghana Web a publication on 17th July 2019 attributed to Mr. Asiedu Nketia, in which he was alleged to have said that he “personally warned” me, Martin Amidu, “against taking up the job of Special Prosecutor because the laws that established the office does not give him the needed powers to work effectively.”

As a student of and a professional conflict resolution practitioner, I decided to ignore the allegations attributed to his fulminations as fake news because what was allegedly attributed to him never took place between us or the party before my nomination, approval and appointment by the President as the Special Prosecutor.

But when I read the printed copy of the same publication of 17th July 2019 from Ghana Web at home days later in detail, I realized that the source of the story was abcnewsgh.com, and lo and behold, Mr. Nketia was quoted as saying that:

‘“We told him, we warned him. I told him that Martin you are a brother and a comrade, the laws that established this office cannot make you work effectively. They are just deceiving you. It will all amount to nothing; they just want to destroy your name. We said it he did not listen” Asiedu Nketia said in an interview monitored by ABC News.’

I had to find the forum for the interview which I eventually found on peacefmonline of 17th July 2019 another version of the story which also contained the audio recording of the interview on Okay FM in Akan. Neat FM also carried the same interview in Akan. I could not believe my ears that a General Secretary of a political party who under the 1992 Constitution is a public officer would hallucinate and lie through his teeth to the public he serves, just to bring my name and reputation into disrepute before right thinking members of the society.

I never consulted any person or political party before meeting the President on 10th January 2018 and accepting my nomination to be put forward for approval as Special Prosecutor. When I was invited to see the President, I did not know why he had sent for me until I answered his call and he announced his intentions. I eventually accepted his proposal on the agreed terms that I would have a free hand to operate without any political interference.

I now have no option than to be convinced that Mr. Nketia might have been hallucinating when he granted his interview that was subsequently published online. Mr. Nketia, if he was not hallucinating, knew that he was deliberately manufacturing fake news and lying through his teeth to simply satisfy his political constituency. How could he advise and warn me a lawyer of more than 38 years standing with vast public office experience at the time, of the efficacy of the law when I had already accepted the offer.

But common sense will prompt any reasonable person who witnessed the unfolding political events in this country before and immediately after the year 2016 to revisit them to refresh his or her memory. It will then be recollected as no secret, when one does this as a reasonable person, that there was no way Mr. Asiedu Nketia or the NDC could have spoken to me or warned me against accepting the offer to be Special Prosecutor from the President because I was not on such speaking terms with him or them during that period. Just visit my website and establish the facts for yourself: martinamidu.com.

Some members of the party’s Functional Executive Committee at the time attempted through surrogates to suspend and dismiss me from the NDC by claiming to bring disciplinary action against me for alleged misconduct. I raised preliminary objections to the charges in a letter addressed to the General Secretary by EMS when I read them in the media on the grounds that I had not been a paid up member of the NDC since I left office in January 2012 and could not per their Constitution be a member subject to discipline by them.

Mr. Nketia never replied to my objections and they could not find me to serve their so-called disciplinary charges. I insisted that whether they liked it or not I was a foundation member of the original NDC which the new NDC of 2016 couldn’t take from me.

Anybody who wants further evidence and proof that Mr. Asiedu Nketia might have hallucinated or might be an irredeemable liar should Google or go to the websites indicated in some of the following on what he and the NDC said on or around 6th February 2018 about my nomination that proves his hallucination and/or lies and the fake news:

(1) Don’t Use Special Prosecutor To Witch-Hunt Us-NDC To Amidu – ghheadlines.com -Ultimate-FM may have also carried a voice interview;

(4) Tainted Amidu is a fine lawyer but campaigned for NPP – Ayine (Myjoyonline.com) and

Common sense will tell any reasonable person that there is no way Asiedu Nketia or the NDC could have spoken to me or warned me because I was not on such speaking terms with him or them.

Nonetheless, I was surprised that after my nomination and before, during, and after my approval and appointment some of the executive members boldly sent me text messages of congratulations and support on the quiet.

I am not surprised that the political elite on both sides of the political divide wish I resigned to enable them either to spend their looted public purse in peace or be able to loot their share now that they have climbed on the back of the President to power.

Is it any surprise that Ghana Web of 20th July 2019 republished a fake news story by a so-called ghanacrusader.com stating that I have engaged in a meeting or series of meetings with some Member of their Council of Elders in which I am soon to resign to rejoin the NDC?

“Martin Amidu on his way out, set to rejoin NDC”, was the banner headline of the Ghana Crusader. There is a concerted bi-partisan effort of the political elite who disagree with the President’s anti-corruption agenda to exert pressure on me to resign so they can be free to keep their loot or loot the public purse which I have been appointed to protect by retrieving, preventing, investigaing and prosecuting where needed.

Those who know my track record in public office over the decades know that no Member of the Council of their Elders would dare speak to me on resigning my public office as the Special Prosecutor. Anybody who approaches me to persuade me to resign my office will be considered to be obstructing me in the performance of my anti-corruption duties as the Special Prosecutor. This time the Office of the Special Prosecutor will handle the matter by itself and not farmed it out to another law enforcement office so that the case will also lie fallow again like the previous widely published complaint and complaint statement of obstruction I lodged for investigation.

The concerted efforts by the political elite to distract me from the duties of my office with calls for me to resign will not move me to abandon the electorate who made the establishment of the Office possible. I also know that there are lots of people in both the NDC and the NPP who would be too happy to hear that I have resigned or been removed from office. I know further that when the President brought up my nomination he faced serious opposition from his own, just like the Asiedu Nketias of the other side also did, but he insisted he wanted an impartial person like me for the job. Watch the TV news on the various stations on 4th June 2019 and you will see the number of NPP MPs who opposed any prosecution of any Member of Parliament for corruption. I have written already on the bi-partisan position of the Leadership of an NPP Majority Parliament under a Pastor Speaker.

My duty is not primarily to prosecute corruption but above all to prevent it. I am satisfied that my collaboration with the Auditor-General and the Minister of Finance have and are yielding preventive actions and results even before the Office fully takes off. As for those who have already looted or are now looting or intend to do so, I will soon catch up with them. That is why the Office of the Special Prosecutor issued the last warning pointing to its powers of enforcement but regrettably inexperienced lawyers and others who did not make a thorough reading of the statement refused or failed to grasp its real import resulting in their fruitless labour in trying to remind me with my vast experience and years as a lawyer of the very powers I had already clearly referred to in the statement.

Every sincere anti-corruption crusader acting rationally can assess independently the evidence and the forces that are against the Special Prosecutor’s appointment and continued stay in office because they pay only lip service to the fight against the pervasive canker of corruption in Ghana. Anti-corruption crusaders can easily see the political elite who put Ghana Last instead of Ghana First as they swore to do under the Constitution. The knowledge that I cannot be compromised in this anti-corruption war is what instills fear in the opponents of exposing corruption, the people who want to see my back through resignation or removal.

I will continue to defend the Constitution and will not keep quiet. I will write about those protecting the practitioners of corruption so that the public will be adequately informed to support the Office when it catches up with them. I will continue to perform the duties of my Office in accordance with the Constitution and the law, without fear or favour affection or ill will, no matter who is suspected of committing the crime of corruption under my watch.

Nobody is going to push or make me jump from the challenges of fighting public office corruption unless the Supreme Court declares the provisions of the Act under which I was appointed unconstitutional, I am impeached or I become convinced beyond a reasonable doubt that the mutual promises and undertakings made with me at my nomination to fight the canker of corruption were not intended to be actualized in practice.

Kudus Mohammed travels with Ajax squad to Austria for pre-season