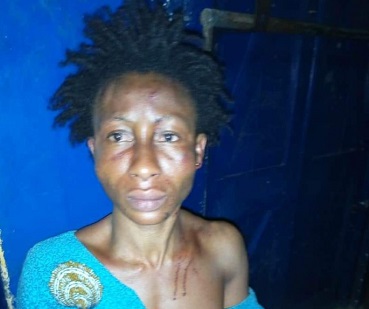 The pregnancy test has proven negative as baby thief lied about her pregnancy status when she appeared in the Takoradi Circuit Court two weeks ago.

The baby thief, Rose Mawusi Fiaku on March 28 pleaded guilty to child stealing but asked the presiding judge of the Court to temper justice with mercy because she was pregnant.

Upon further questioning by the judge, the baby thief claimed she may have suffered a miscarriage because she was assaulted during her arrest by the Police.

Despite her claim, the presiding judge ordered for a pregnancy test to be conducted to establish if she is or was pregnant as claimed and the case adjourned to April 5.

When the case resumed today, April 5, the test result presented to the court showed that the baby thief was not pregnant as claimed; she was negative.

But Rose, who is awaiting sentencing for pleading guilty to child stealing, told the court her claim was based on the fact that her menstruation ceased two months ago.

According to her, once her menses ceased, she concluded she was pregnant without medical evaluation or pregnancy test.

Some of her family members who appeared in court suggested the accused had been behaving strangely prior to the stealing of the baby boy, prompting the judge, Ms. Abena Agyin Doku to enquire whether Rose has any history of mental disorder.

In view of this, the judge has ordered the prosecution to conduct a psychiatry evaluation on Rose to establish her sanity before a sentence could be passed on her conviction.

The case stands adjourned until April 26 when the test is expected to have been concluded.

Meanwhile, Rose’s lover, Lawson Lartey, who pleaded not guilty to the charge of stealing, has been granted bail by the court.

Lartey, who appeared in court without his lawyer, had his bail condition set at 10,000 cedis with two sureties.

The one-year-old boy, Mawusi was stolen from her mother, Nana Akosua Bowaa, at the Market Circle, on March 22, 2019, by Rose who was said to have sweet-talked the mother into giving the child to her.

Rose requested to help the trader, Nana Akosua to hand over her baby boy to her to relieve her to speed up with serving her customers. The suspect then took the one-year-old boy and his siblings to a nearby pastries shop and bought them some, and later returned the siblings leaving the one-year-old boy with the pastries seller.

A CCTV footage showed Rose, who had a veil covering her hair, leaving the market area with the little boy.

Following a tip-off, little Mawusi was rescued in the wee hours of Tuesday from the baby thief and Lartey who was believed to be her husband at the time.

The two were subsequently arrested and taken into custody.