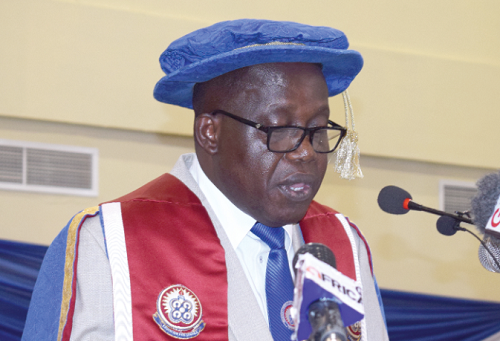 University of Education, Winneba's, UEW, Vice-Chancellor, Prof. Anthony Afful-Broni has been sued by the Chairman of the Senior Staff Association of the University, Kinsgley Amoakwah.

Kinsgley Amoakwah is asking the High Court for an order restraining Prof. Afful-Broni from holding himself as the Vice-Chancellor or performing any such functions in that capacity of UEW.

He also wants an order preventing Prof. Afful-Broni from “continuously interfering in the administration of Prof. Mawutor Avoke,” whom he claims is the legitimate Vice-Chancellor of the University.

“An order restraining Prof. Afful-Broni, his assigns, agents, or any person claiming through him from walking or driving within the precincts of the Main Administration Block of UEW, where Prof. Avoke’s office is located.”

Mr. Amoakwah wants police protection for Prof. Avoke to enable him to undertake his duties as Vice-Chancellor without any fear of attack from criminals and thugs who may threaten his life.

He is seeking “a declaration that an attempt by the Governing Council and UEW to ignore the findings of the Economic and Organised Crime Office (EOCO) Report is unjust, illegal, null and void.

“A declaration that the EOCO Report which findings exonerated Prof. Avoke overrides and supersedes all proceedings and findings of the supposed fact-finding committee set up by the Governing Council of the university.”

The applicant, who is an accountant by profession, wants the Court to declare that the setting up of a fact-finding committee to investigate Prof. Avoke on matters that were already before EOCO, amounted to an abuse of office, the wrongful exercise of discretion, an act of bias and double jeopardy.

He is demanding a declaration that the Governing Council of the university had no jurisdiction to investigate a criminal allegation against Prof. Avoke when same issues and facts were before EOCO.

“A declaration that the Governing Council exceeded its jurisdiction when it set-up a fact-finding committee in a matter already before EOCO.”