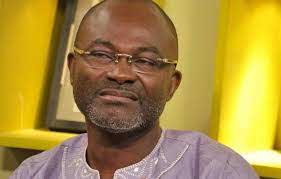 Lawyer for Sammy Gyamfi Beatrice Annan says they reported the threat of Kennedy Agyapong to the Criminal Investigations Department (CID) due to the history behind the death of Ahmed Suale.

Kennedy Agyapong on Asempa FM's Ekosiisen show on August 4, 2020, is said to have threatened to organise thugs to physically assault Sammy Gyamfi.

Sammy Gyamfi's lawyers on August 6, 2020, filed an official complaint accusing the member of Parliament for Assin Central of allegedly threatening his life.

His lawyer says they did so because of how his threat to former Tiger Eye PI journalist Ahmed Suale seems to have played a path in his death.

"You will notice that ordinarily this would have been considered as one of the discussions that accompany political discourses in the country but having regard to the recent issue and fact that Ahmed Suale faced a similar threat it becomes imperative to show that Kennedy Agyapong has the capacity not only to threaten but to carry out the threat so we will not disclose the details. We had to take the step of lodging an official complaint to the CID so that in the unlikely event that anything happens we know who to look out for. We have a meeting with the police on August 17, 2020. Sammy Gyamfi is fine except that because it is Ken Agyapong we believe he has the capacity due to recent events,"

Ms Annan clarified that they are not accusing Mr Agyapong of Suale's death but his threat could have played a huge part and they will not take chances with this.

"We can't say Ken Agyapong is responsible for the death of Ahmed Suale but we can say that when his threat was contemporaneous enough to the act then we are taking precaution based on that, because if he has done that before and it resulted in an act then we can't take this as just a political gimmick. We want the police to do their work because we have made a criminal complaint and he has to be invited and asked questions".

Ken Agyapong issued the threat in response to Sammy Gyamfi’s claim that violence had marred the voters’ registration exercise in his constituency.

This claim angered Ken Agyapong who insisted it was not true that pockets of violence had been recorded at his constituency since the exercise began.

He then asked Gyamfi to refrain from throwing dust into the eyes of the public or he will be dealt with.