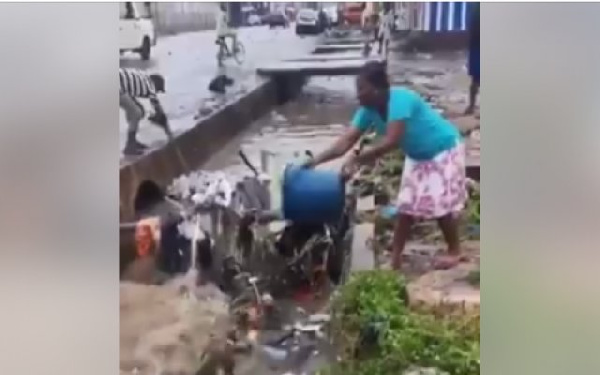 The Accra Metropolitan Assembly (AMA) has admonished the public to volunteer information that will lead to the arrest of a woman who was captured in a video disposing rubbish into a drain during last Wednesday's rains.

According to the AMA, the woman’s conduct is against the by-laws of the Assembly. In a statement condemning the incident, the AMA lamented such actions of indiscipline derail the efforts of the Assembly.

“Such indiscriminate act of refuse disposal into the drain contributes to flooding in parts of the city. Such acts of indiscipline undermine the efforts of the Assembly and the government to achieve a clean city,the statement indicated.

The Assembly has called on Ghanaians to be responsible for their environment and refrain from such bad attitudes as they go a long way to frustrate the efforts to address the perennial flooding in the city.

Meanwhile, President Akufo-Addo speaking to the Ghanaian community in Canada said unless Ghanaians change their attitude and habit toward the environment, floods will always hit the nation when it rains.

“Up till today, while the Odaw River is being dredged, some people think that the best way to dispose of rubbish is to throw it in the gutter; how do we stop flooding with this attitude?”.

“No amount of investment aimed at finding a solution to Accra flooding will work if our people continue this way''.

The President further indicated that he is not prepared to spend money on floods if Ghanaians do not refrain from activities that contribute to floods.

“Let’s speak to our families at home, if we stop this habit we will solve this flooding in Accra. If we don’t, no matter the investments we make, at the end of the day we will be back to square one and I am not prepared to spend your money in that way”.

“We have a situation in our country; time and again when Ghanaians say: ‘We want this, we want that’, but the attitudinal change that will enable us to be able to bring value to these demands is always left out'', the President added.