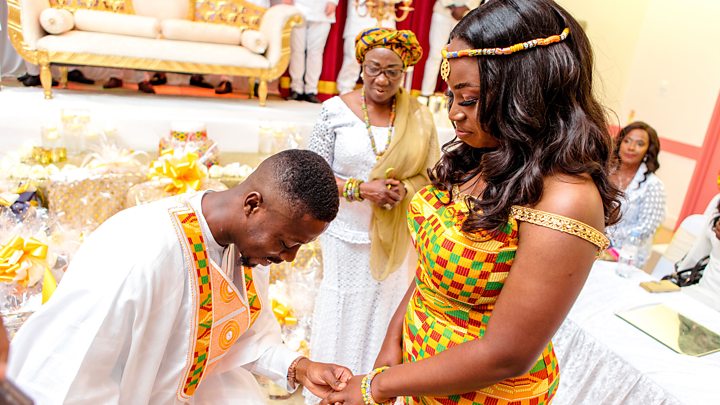 "I don't view the Bride Price as me being paid forâ€¦ Geoffrey can't afford me," says Angela, a British-born Ghanaian describing a family tradition common across Sub-Saharan Africa.

"Instead I like the idea that my fiancÃ© and his side are thinking about me as a treasure coming into their family".

Bride Price is when the family of the groom pay their future in-laws at the start of their marriage.

The payment can be made up of money, presents, or a mixture of both. It's sometimes paid in one go, but installments aren't uncommon. It's also practiced widely in Thailand, China, and Papua New Guinea.

READ ALSO: What you should know if you are 40 years old or above

For Angela it's all part of accepting her roots: "Africans are proud of being Africans, you know. There was a time where it wasn't necessarily the coolest thing to be African. Now, you see this great embrace of the African culture."

Her now-husband Geoffrey, who is also a British-born Ghanaian, describes it as a token of appreciation for the bride's family.

"Anything significantly more than a tokenistic gesture risks undermining the process as well, because then it actually gives meaning to the word Bride Price."

'You are not for sale, no-one can buy you'

A week before their legal ceremony, Geoffrey and Angela celebrated their traditional Ghanaian wedding.

It's during this ceremony that the Bride Price - a collection of money and gifts - was presented to Angela's family.

But the couple decided to modify the tradition slightly: "The Bride Price that is given is actually going to be gifted back to us as a couple.

"My mum has been super transparent with me and from the very beginning she's always said "You are not for sale, no-one can buy you"."

The cost of the Bride Price varies significantly. Geoffrey says: "It was fairly modest. It was in the hundreds."

But Derby-based husband and wife Blessing and Chelsea chose to approach things differently.

Blessing, who is originally from Zimbabwe, says he took a second job to pay for the Bride Price: "I'll just say roughly, it's enough to put a deposit on a mortgage for a UK property."

Initially, Chelsea was reluctant to go ahead with a traditional wedding because her dad passed away.

"I was likeâ€¦ who's gonna take the money? Because it's mainly supposed to be about your dad and your mum. And it just didn't feel right for me."

But Blessing convinced his wife to go ahead and, despite the large sum of money he paid, he believes paying the Bride Price was beneficial.

If he hadn't paid the Bride Price he says he wouldn't have been able to approach his wife's family.

It's not clear exactly when Bride Price became common in Africa. But in many countries, it predates cash.

Historically the tradition varied depending on country and culture.

Evelyn Schiller campaigned against Bride Price in Uganda. She believes the focus of the tradition has changed over the past three generations.

"Look at today, what the gifts look like. They are monetary, and that is where the word price comes from. It is no longer a bridal gift. It has become a Bride Price."

InÂ 2015 The Supreme Court in Uganda ruledÂ that Bride Price should be optional but, if a couple gets divorced, claiming for a refund is illegal. Support for Bride Price continues in Uganda because it is seen as a way to cement relations between communities.

UK-born Nigerian podcaster Tolly T has questioned whether the tradition of Bride Price would work for her: "Ultimatelyâ€¦ it's giving me money for my child. It feels very ownership like."

'Black British have a culture of our own now'

The co-presenter of the Receipts Podcast believes that tradition encourages value to be placed on the material accomplishments of women: "It's a self-esteem thing, for example, "I'm not worth this because I didn't go to uni", or "I don't earn this amount of money"."

"And ultimately what does that have to do with me being a good wife?"

"I do think a lot of us millennials, like black British or black, Nigerian British, or whatever, we are a culture of our own now," she adds.

"We're kind of like taking bits that we want from being African and we're taking bits from being British as well. So we've created this subculture where we question things, and then we do it if it makes sense for us".