The Portuguese stew cooked in the ground 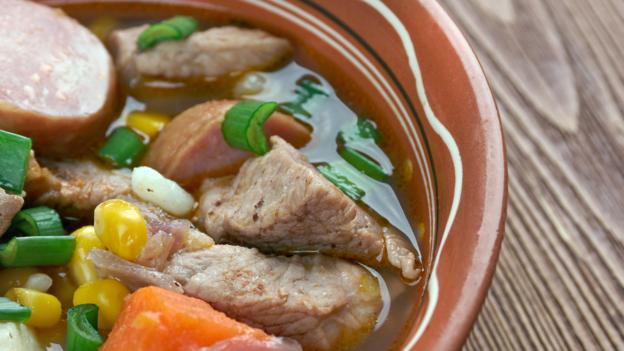 SÃ£o Miguel, the largest island in Portugalâ€™s Azores archipelago, boasts of one thing almost no other destination can offer: volcano-cooked stew.

Hissing with geothermal heat, this lush island is famous for its traditional dish, cozido das Furnas, which involves burying various meats and vegetables in volcanic soil to cook. While this natural cooking method is energy efficient, it requires a high degree of patience.

Chefs begin cooking cozido das Furnas by collecting ingredients in a pot: different cuts of meat and blood sausage, as well as vegetables like potatoes, cabbage and carrots. No liquid is added; instead, the potâ€™s contents will stew in volcanic steam. Around 04:00 the morning after preparation, the pot is inserted into a 1m-deep hole at or near the hot springs at Furnas Lake, where the stew will cook at around 100Â°C for the next six to eight hours.

For the people of SÃ£o Miguel, cozido das Furnas is more than a unique, time-intensive dish â€“ itâ€™s a central part of their heritage. The stew dates back at least 80 to 90 years, and the recipe and cooking method have been handed down through local families for generations. While cozido das Furnas began as a feast and Christmas dish, it is now much more widespread on the island, making it a must-try for any visitor.