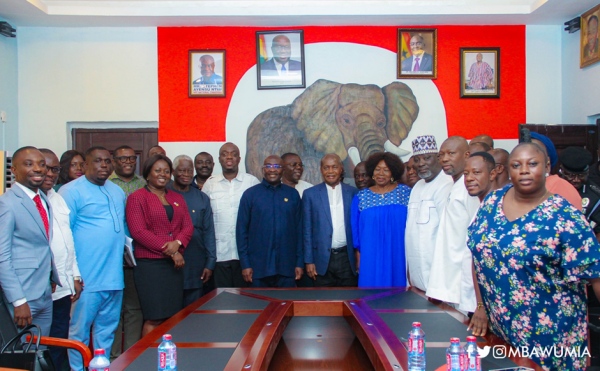 Vice President Bawumia has announced that he's committed to embark on a fundraising effort to support the party's agenda of registering all members to help with its data and membership analyses and shall raise funds for the party membership registration especially with the registration of Polling Station Executives, Electoral Area Coordinators, Constituency Executives, Regional Excutives and National Executive Commmitee.

Dr. Bawumia noted that ministers, members of parliament, appointees, patrons and other party supporters will be contacted to support the fundraising exercise.

The Vice President made this known on Wednesday, November 9, when he paid a working visit to the headquarters of the governing New Patriotic Party (NPP) in Accra.

READ ALSO: Let's preserve our culture and heritage for the unborn generations – Bawumia

Dr. Bawumia also thanked the national officers of the Party for the cordial reception and congratulated them for their respective electoral victories during the National Delegates Conference.

He expressed his believe in the Executives and noted that they have the qualities to manage the affairs of NPP. He indicated that the Party-Government engagements will help close the gap.

Vice President Dr. Bawumia also indicated to the Party leadership about his cardinal of assisting his boss, President Akufo-Addo to execute his mandate as a President which he is committed to seeing it done diligently. He also outlined some of the major policies he spearheaded like the implementation of the government's digitalisation agenda,the Sino-hydro deal which has led to the actualization of face lifts of roads and interchanges, paperless ports, the enhanced mobile money interoperability, one constituency one ambulance, among others.

He again pledged government's commitment to address prevailing economic conditions in the country and assured that mitigation measures are being put in place to relief citizens of any plight regardless of the external shocks.

The National Chairman on his part praised the Vice President for his visit and urged him to continously support Party activities and assured him of the Party's unalloyed suppport to government and will continue to help the government succeed.