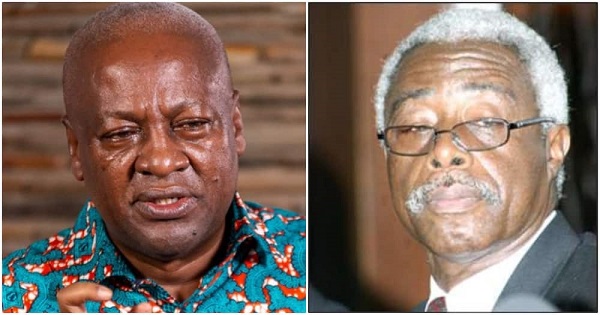 Retired Court of Appeal Judge, Justice Isaac Douse has cautioned former President John  Mahama not to drag the image of the Supreme court in the mud because such an act can be a threat to the country’s democracy, and will not only affect the apex court but every Ghanaian as well.

Addressing a conference of lawyers of the opposition National Democratic Congress (NDC) on Sunday, August 22, 2022, Mahama bewailed that the judiciary has now become the butt of jokes, as a result of its biased rulings and decisions on cases with a political tinge.

According to him, the country’s judiciary is “broken” under the leadership of Justice Anin-Yeboah, and hoped that a “new Chief Justice” will lead an image-cleansing crusade in the future, since, in his view, the current Chief Justice cannot lead such a process.

Recently, he noted, “so badly has the image of our judiciary deteriorated that many of our citizenries openly make a mockery of our justice system and of our justices”.

“The phrase, ‘Go to court’ is, these days, met with derisive laughter, instead of hope that one will truly get justice if he went to the court”, Mr. Mahama explained.

“It is difficult to agree with him [Mahama] on the soiled image of the judiciary, the judiciary has a range from the magistrate court all the way to the supreme court. From what I’ve read, he has a problem with the supreme court and the cases that they took there and history has shown us something that we should not do too frequently.”