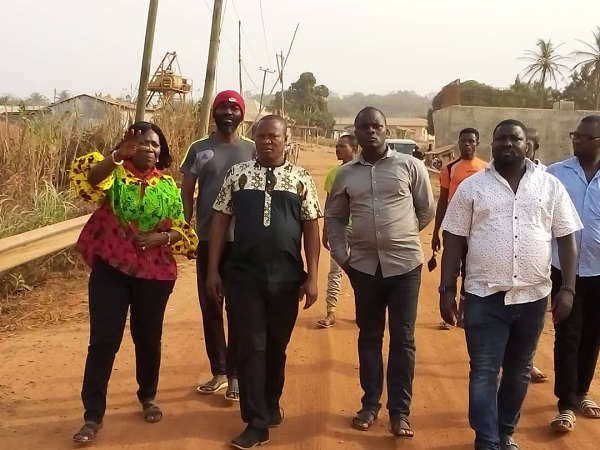 The Member of Parliament for the Kpando constituency Ms Della Sowah has called on government to as a matter of urgency fix the temporary and uncompleted bridge that connects Kpando Dafor through Agbenoxoe in the Kpando municipality also links up Nkonya in the Oti Region.

She made this call upon a working visit to the area to inspect the extent of damage after the bridge was submerged after last year's rains.

According to the indigenes, the bridge under construction to replace the old one has been abandoned by the Chinese contractors.

The bridge is an important link that connects Dafor through Agbenoxoe to the major market centres in Kpando.

The MP who expressed her deepest concerns about the current state of the temporary bridge said, it was important for the government to fix the bridge as a matter of urgency before the raining season resumes.

The hole created in the temporary bridge poses an imminent danger and not in any good shape to be used by pedestrians, motorist and other road users.

The indigenes say they are really frustrated due to the bad nature of the temporary bridge. They say the current state of the bridge leaves them with no other option but a daily struggle to commute between Dafor to the major market places in Kpando.

Mrs. Sowah used the occasion to assure the people of Dafor that, she would continue to lobby and push government to work on the bridge since it was of serious importance to her and all road users who ply the Dafor-Agbenoxoe to Nkonya area for their daily activities.