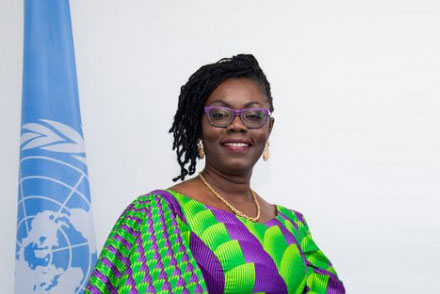 The Minister of Communications, Ursula Owusu Ekuful has charged the NPP government to prevent Mahama from returning to power in 2020 and has urged them to remain in power after 2020 and beyond.

According to the Minister for Communications who doubles as the member of Parliament for Ablekuma West, NPP is the only political party that can lead the development agenda of Ghana.

On May 3, 2019, Ursula Owusu brought together some leading women of the governing New Patriotic Party to discuss ways to empower them.

Speaking at the forum dubbed, ‘The Ablekuma West Women’s Conference’ to discuss ways to empower women folks in the NPP, Mrs. Owusu Ekuful spoke of the need to stop Mahama from returning to power. She also urged the NPP to continue to be in power after 2020 and beyond

“Let’s go into the 2020 campaign,” she continued “with a sense of belonging and the notion that your problem is mine, mine is yours and continue to sit on the seat of power till thy kingdom come,” she said.

“We are determined to guard this power that we have jealously. Together we will fight to protect it, the power that Ghanaians gave us. The worst NPP government is better than NDC’s best''.

Also, cautioning the participants against an act that will endanger the chances of the party in 2020, Mrs. Owusu Ekuful said:

“If somebody is complaining in our polling stations we, the polling station executives, especially the females, it is our responsibility to explain government policies to them so that they will understand that since this government came to power unprecedented development has touched every home in this country.”