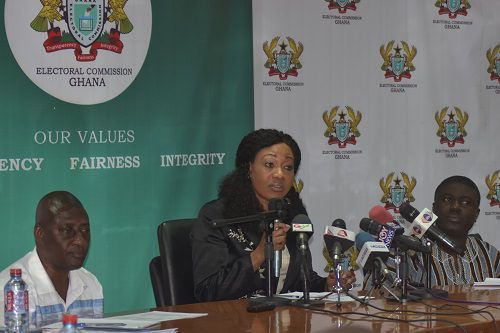 The Electoral Commission (EC) has called on the National Identification Authority (NIA) to accelerate the pace of the printing of Ghana cards to make it easy for people to acquire their cards, as they will soon be the only form of ID for voter registration.

This follows the confirmation by the EC that it has decided to scrap the guarantor system and rather now use the Ghana Card for the compilation of a voter register for the 2024 general election.

Speaking at the ‘Let the Citizens Know’ series in Accra last Thursday, the Chairperson of the EC, Jean Mensa, said the commission was aware that the NIA had some challenges in issuing and distributing Ghana cards to Ghanaians, but those hitches were surmountable.

She said the EC had already engaged the NIA, which had given an assurance that the cards would be issued to Ghanaians to help them register.

"We have engaged the NIA and it has assured us that the cards will be issued to Ghanaians to help them register.

“More to the point, we have two clear years to the 2024 elections and so people will not be disenfranchised when we use only the Ghana Card for registration.

“We thus call on the NIA to make the process of acquiring the cards easier and more efficient to ensure that all eligible voters are able to get their cards and be able to register,” she said.

Mrs Mensa, explaining why the EC had decided to do away with the guarantor system, said the system, which allowed registered voters to serve as witnesses to authenticate the nationality of prospective registrants, was fraught with challenges, as it created a window for minors and foreigners to infiltrate the voters register.

"We do not believe that we should still keep the guarantor system when we have the Ghana Card as the best way of determining who is a Ghanaian. People take advantage of the guarantor system and turn themselves into contractors during voter registration. This is not a system we should encourage at all, going forward," she said.

Since Ghana returned to constitutional rule, the EC has periodically compiled voters registers.

Until now, the modes of identification had been a valid passport, a national ID, an existing voter ID or two guarantors for those who had no form of ID. Those guarantors were persons already registered and issued with voter cards.

The intention is to amend the laws to now have the Ghana Card as the only accepted form of ID for all prospective registrants.

The C.I. has been referred to the Subsidiary Legislation Committee of Parliament.

That decision has drawn some criticisms and reactions from various stakeholders, including a former EC Chairman, Dr Kwadwo Afari-Gyan.

In an article exclusively published in the Daily Graphic, Dr Afari-Gyan, who chaired the EC from 1992 to 2015, said the decision of the EC to use the Ghana Card as the only form of continuous voter registration would result in the disenfranchisement of millions of qualified Ghanaians.

He said many Ghanaians were finding it difficult to obtain the Ghana Card and so making it the only form of identification for voter registration was against “electoral inclusivity, fairness and justice”.

However, the Deputy Commissioner of the EC in charge of Operations, Samuel Tettey, also at the ‘Let the Citizens know’ series, explained that the decision to do away with the guarantor system in the continuous voter registration would help preserve the integrity of the poll book.

“Today, 30 years on, we cannot continue to use a system that is fraught with challenges when we have a credible system, that is, the Ghana Card, in place,” he stressed.

He added that scrapping the guarantor system would save the country a huge amount of money that would have been spent on cleaning up the register of unqualified registrants.

“This comes at a huge cost to the commission. It is an unnecessary, wasteful and time-consuming exercise that arises as a result of guarantors guaranteeing for persons who are not qualified and we should not condone it,” he said.

He stressed that scrapping the guarantor system and using the Ghana Card would prevent foreigners from influencing elections or having a say as to who governed the country.

Mr Tettey said the 2012 National Identity Register Regulations, Legislative Instrument 2111, Regulation 7 (1), stipulated that a national identity card issued to an individual shall be used for a number of transactions where identification is required.

“One of the mandatory transactions stated in Regulation 7 (1) j is the registration of voters,” he said.

He observed that although the Ghana Card was not the only requirement for registration, at the end of the registration exercise in 2020, over 60 per cent (10 million) of registered voters had used the Ghana Card as the main source of identification.

“On the strength of these numbers, we are convinced that the one million applicants we expect to register as of now following the last registration exercise in 2020 are more likely to possess the Ghana Card.

“For our part, as the institution mandated by the 1992 Republican Constitution to compile the register of voters and revise it at such intervals as may be determined by law, we will do everything in our power to register all qualified applicants who wish to register as voters. Our goal is to ensure that no one is left behind,’’ he emphasised.