Nepotism debate : The hypocrisy and double standard is too much - Sammy Gyamfi descends on Kweku Baako, Kofi Bentil  (Video) 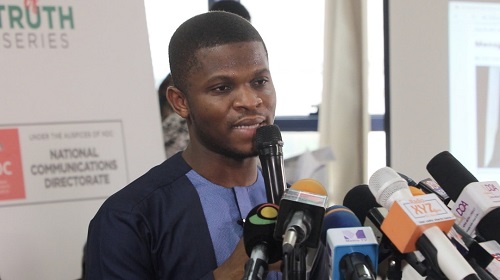 The National Communications Director of the NDC Sammy Gyamfi has descended on Kweku Baako and Kofi Bentil for what he describes as their double standard and hypocrisy.

Sammy Gyamfi who was reacting to comments made by the Managing Editor of the New Crusading Guide and the Senior Vice President of IMANI Africa Kofi Bentil on the nepotistic nature of the Akufo-Addo government said they exhibited double standards in their communication.

Kweku Baako contributing to the nepotism debate on NewsFile on Joy FM said the list provided by the opposition National Democratic Congress (NDC) alleging that President Akufo-Addo is running a family and friends government is for propaganda purposes.

Kweku Baako described the list of 51 persons as means by the NDC to just push a propagandist agenda.

“Assuming without admitting they are all truly friends and family of the president what is the percentage?” he quizzed while contributing to a discussion.

Mr Baako noted that if the president appoints thousands of personnel to various positions in the country and 51 “that are his family and friends what is the percentage?” of the total number of appointments.

He probed further on how many of Akufo-Addo’s friends and family are in key positions like cabinet, ministers, deputy ministers, regional ministers and others.

Kofi Bentil taking his turn on the show said concerns raised by the NDC about the nepotistic nature of the Akufo-Addo government will not stand any objective test.

Kofi Bentil said the number of appointments the President has to make and the number of individuals the NDC provided as family and friends do not match for them to tag the administration as nepotistic.

He advised the NDC to elevate the political discourse because the nepotism debate has no value.

"If we start talking about the individuals and start doing the analysis we will be in the weeds and we won't get anywhere no objective check looking across the staffing and the appointment will show Akufo-Addo is nepotistic. If you take 6,000 as the appointees and there's even 50 that's like 1%. I think NDC should elevate the discourse because this has no value anywhere, you can't prove it and you can't cause any movement in this direction....the fact that somebody's positioning allows them to do something does not mean they have done it, Kwame Nkrumah ruled this country with an iron fist for how long but we can't point one house he had, this thing you are calling nepotism is a valued issue but it is one of the amorphous concepts in the world... at the end of the day it comes down to whether the person is qualified for the job and that is not the most important issue whether they are delivering on the job, the other aspect to it is that whether they are using the position for something that is wrong, three things is the person qualified and in political appointment that is not a big issue, are they delivering......"

In reaction, Sammy Gyamfi did not take it lightly on his co-panellists, according to him all panellists were in the country in 2016 when President Akufo-Addo then the Presidential candidate of the NPP made the promise to Ghanaians he will not run a family and friends government, of which they even questioned the appointment of  Joyce Bawa Mogtari who is a relative of President Mahama.