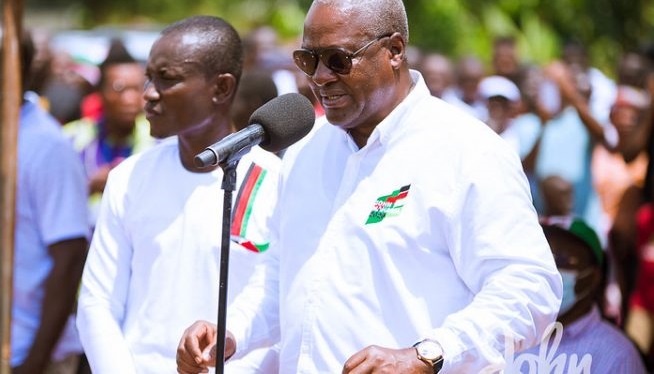 Former President John Mahama has promised to use every legitimate means to help embattled Menzgold customers to retrieve their locked up funds.

Speaking to residents of Tarkwa-Nsuaem, he said all the customers need to do is vote him back into power in this year's election and he will help them.

"You can clearly see that the Menzgold issue is not an issue of concern for the NPP government because they are not doing anything. The man at the centre of the whole chaos is walking freely if Menzgold customers want to demonstrate they are usually intimidated by the police. Surely NDC will come and help these people get their cash."

Mr. Mahama said his stance was in stark contrast to the Akufo-Addo administration’s which had let the Menzgold CEO, Nana Appiah Mensah off the hook.

Following an order from the Securities and Exchange Commission (SEC) to suspend aspects of its operations in 2018, Menzgold has since struggled to pay its customers their monies.

Mr. Appiah Mensah was accused of running a Ponzi scheme.

In July, he said an NDC government would pay all persons who have funds locked up with the collapsed financial institutions within one year.

“We shall not put up any long-term payment plans that will further worsen the living conditions of the victims,” he said.

He also said the NDC would establish a Financial Services Authority “that will be responsible for ensuring that consumer financial markets work for consumers, providers and the economy as a whole.”

The Authority is intended to oversee all financial products and services that are offered to consumers.

Mr. Mahama said the authority will “effectively and efficiently prevent and stop the challenges that have confronted customers of Menzgold, DKM among others.”