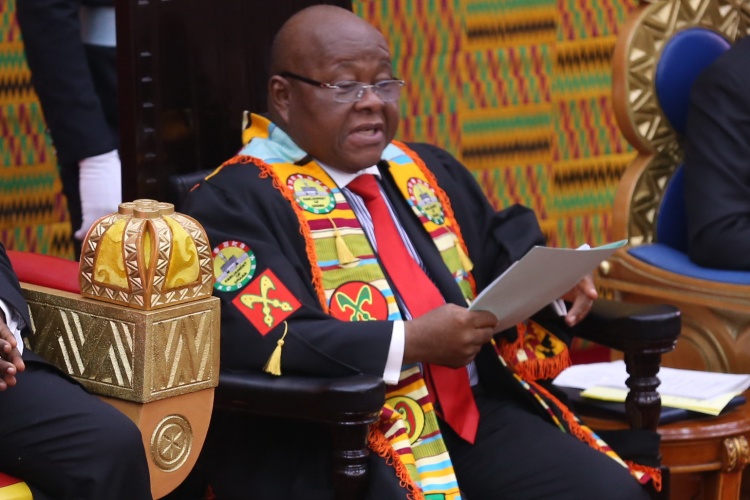 Speaker of Parliament Prof Mike Ocquaye has stated that the executive cannot stampede Parliament into rushing its work.

According to Prof. Ocquaye, Parliament as an arm of government which is independent of the executive and that the appointment committee will go ahead with its work.

His comment follows the latest directive from the Presidency today that President Akufo Addo has scheduled Monday, December 23  for the swearing-in of Justice Anin Yeboah whereas Parliament yesterday set Monday, December 23 as a date for vetting of the nominee.

Reacting to a statement read by the Majority leader in Parliament, Prof Mike Ocquaye said the President can swear-in Justice Anin as the new Chief Justice after Parliament is done with its vetting process and approved the Chief Justice Anim.

Presenting the business statement on the floor of Parliament, Majority leader Osei Kyei-Mensah-Bonsu disclosed the Presidency will have to be impressed upon to shift the swearing-in of the nominee to Tuesday following parliament’s decision to vet him on Monday instead of Saturday.

“This is the reason why initially I was insisting that we could free tomorrow for that enterprise so that we could do so thoroughly tomorrow. But the minority leader raised some legitimate concern. We intend to have the appropriations bill tomorrow and he insisted that the minority leader should be part of the consideration for the appropriations bill and I agree with him, he cannot be at two places at the same time. For which reason we have decided to have it on Monday,” he said.

He, however, indicated that “the president wanted to swear him in at a given time when the impression was created that the vetting was gonna happen tomorrow. But now that the vetting is gonna happen on Monday, I will have serious clashes with him. If he has to locate it to Tuesday, so be it. After-all Tuesday is still a working day.”

Minority leader Haruna Iddrisu, however, mentioned the appointments committee will do its best to ready its report on Monday for approval.

The former president of the Republic of Congo, Jacques Joaquim Yhombi-Opango,…