Referendum: It's only a fool who doesn't change his mind - NPP tells NDC (Video) 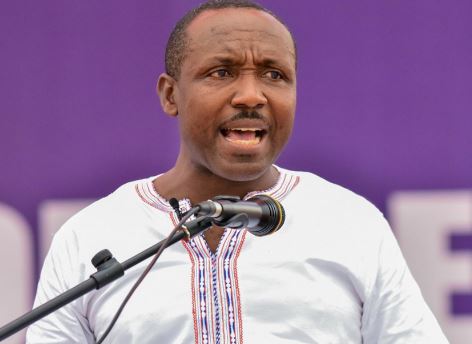 General Secretary of the New Patriotic Party (NPP) John Boadu has called on the National Democratic Congress (NDC) to change their stance on the abortive referendum.

Mr Boadu who was addressing the press said the NPP is saddened by the decision to withdraw the December 17, 2019 referendum which was to amend an entrenched provision in the 1992 Constitution, Article 55(3) to allow political parties to sponsor candidates in local level elections.

He said President Akufo-Addo who called off the referendum acted in good faith as a feat like this needs the whole nation to come to a consensus.

Mr. Boadu also ripped into flagbearer of the NDC John Mahama as he believes his inability to make proper decisions on issues is a big worry.

He, therefore, called on Ghanaians to ignore him in the 2020 general elections.

The NPP scribe also said the position of the NDC which forms part of the factors that made President Akufo-Addo withdraw the referendum has cost Ghana a lot.

He then said the NPP fully supports the President's decision but the NDC should have a rethink about their position and they should do that with immediate effect.

"The NPP fully supports the President on the withdrawal decision to do further consultation but to the NDC, it is said that only a fool does not change his mind but if the fool does change his/her mind, it should be done with haste so it does not affect wise people"