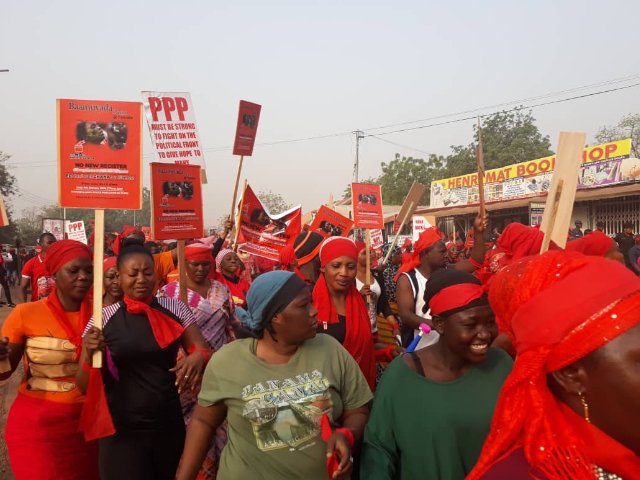 Peter Otokunor the Deputy General Secretary of the opposition National Democratic Congress (NDC) says the ‘Tikusayi’ demonstration held in protest of the new voters' register has sent a big statement to the Electoral Commission and the government.

He says the parties against the new voters' register intentionally decided on staging the demonstration in the Northern Region because there are lots of underprivileged people in the regions of the north and if you are going to waste the little resources we have then the people have a big say.

READ ALSO: We will protect and guard our growing democracy from destruction by the EC - Asiedu Nketia cautions

"We are overwhelmed by the number of people who turned up for the demo, we wanted to make a big statement to the government and EC and we have achieved that, this is the Northern Region and that is where we have more underprivileged people and if we are going to waste the limited resources we have on compiling a new voters register then they have a big say. They do not have good hospitals, school among others and this means a lot to them so they are trying to protect the public purse,".

Mr Otokunor has been one of the fierce critics of the new voters' register, he believes that the old register has no defect as the EC claims.

Peter Otokunor said if the Electoral Commission's reasons for the compilation of a new register is the high rate of manual verification, then the problem is with the software, not the voters’ register.

Hundreds of people today January 11, 2019, marched through some major streets in Tamale to express their displeasure about the decision by the EC to compile a new voters’ registration.

The demonstration dubbed ‘Tikusayi demonstration’, started from the Jubilee Park and had in attendance party bigwigs from the opposition NDC, the APC and the PNC.

Present at the grounds was also the founder and leader of the APC, Hassan Ayariga, Minority Leader in Parliament Haruna Iddrisu and the MP for Tamale North, Alhassan Suhuyini.

The EC has stated that their decision to change the voters' register is to have more credible voters register saying the current one is over-stretched. Adding the new one will protect its credibility.

This has not gone down well with these opposition groups.

According to them, the justification by the EC for a new voters' register is unacceptable and will ''amount to complete wastage and needless spending of limited state resources''.