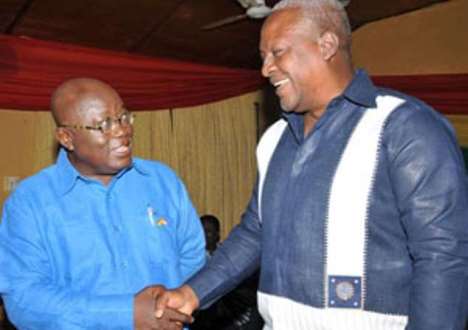 Former President John Mahama has repeated his call for a debate with President Akufo-Addo.

This time he asked President Akufo-Addo to select his own moderators for the debate.

He says the NDC has a more superior record of providing equitable distribution of development projects across the country than the New Patriotic Party (NPP).

READ ALSO: The Akufo-Addo I know doesn't run from debates, this must happen - Franklin Cudjoe

Addressing the chiefs and people of Kwamekrom in the Biakoye constituency at the beginning of a three-day tour of the Oti Region on Friday, Mr Mahama said president Akufo- Addo is at liberty to select the moderators and the institution that he wants to organise the debate, and he will show up to debate the president on any day, at any time and anywhere.

He again asked what the Akufo-Addo government has done with the GHC140 billion it has so far added to the national debt stock by way of loans, saying he built roads, hospitals, schools, airports, expanded access to water and electricity, among others with the GHC54 billion borrowed during his tenure as president.

Mr Mahama told the chiefs and people that consistent with the NDC’s policy of providing each region with a public university, a new government of his party will provide a university in the Oti Region to develop the human resource capacity of the area.