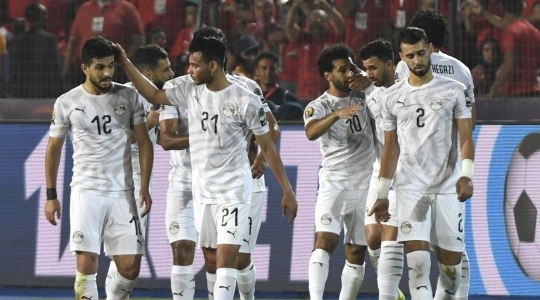 Egypt saw off Uganda at the Cairo International Stadium in their final group fixture to top Group A.

Goals from Mohamed Salah and Ahmed El-Mohamady ensured the Pharaohs walked away with a comfortable 2-0 victory.

With both teams already qualified to the round of 16, it was a match of who tops Group A.

A thrilling first half entertained supporters at the Cairo International Stadium with Uganda dominating in the early stages of the game.

Egyptian goalkeeper Mohamed El-Shenawy produced a double save to deny Uganda from taking the lead in the 34th minute. A minute later Mohamed Salah scored from a dead ball situation to give the Pharaohs the lead.

Egypt doubled the lead through their skipper Ahmed El-Mohamady who latched onto a perfect pass and fired a low drive into the net.

Salah then had an opportunity to get a brace on the day but he fluffed his lines in the 51st minute.

In the other Group A, DR Congo thumped Zimbabwe 4-0 with Cedric Bakambu brace, Jonathan Bolingi and Britt Assombalonga goals securing the Leopards their first win in the tournament.