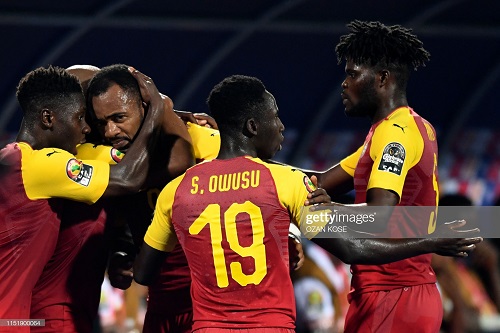 Black Stars delivered a mediocre performance on Monday afternoon as they beat Sao Tome and Principe 1-0 at the Estádio Nacional 12 de Julho in the AFCON 2021 qualifiers.

It had to take a Jordan Ayew's second-half penalty which separated the two sides at the Estádio Nacional 12 de Julho. This means Ghana have won two successive games in the qualifiers after last Thursday's victory over South Africa.

Ghana now leads Group C with 6 points being followed by Sudan and South Africa with 3 points apiece while Sao Tome has zero points.

Black Stars started the match on a front foot but the nature of the pitch made it difficult for the West African nation to play their free-flowing football.

Jordan Ayew got the first chance in the game to put Ghana ahead after goalkeeper Gilmar Eusebio made a mess of a back pass but the Crystal Palace ace decided to pass the ball to strike partner Emmanuel Boateng who was flagged offside.

Andre Ayew met a Gideon Mensah's cross in the 20th-minute mark but his effort couldn't hit the back of the net. The West African nation couldn't breach the defence of their opponent as the first department ended 0-0.

Thomas Partey nearly broke the deadlock after the recess when he met Andre Ayew's cross but his effort down failed to test the keeper.

Moments later, Emmanuel Boateng got a penalty for Ghana when he was pulled down by goalkeeper Gilmar Eusebio as he was about to fire home.

Jordan Ayew stood up to the task and he beautifully dispatched home as he sent the keeper the wrong way.

Kwesi Appiah introduced Kudus Mohammed and Christopher Antwi-Adjei in places of Emmanuel Boateng and Samuel Owusu respectively in search of Ghana's second goal but all effort proved futile as the game ended 1-0 in favour of Ghana.