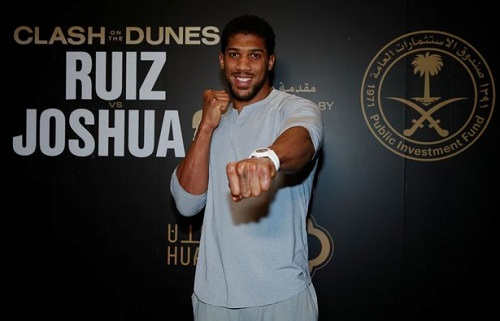 Anthony Joshua is set to pocket the biggest-ever purse for a British fighter in Saturday’s rematch with Andy Ruiz Jnr.

Joshua’s earnings for the Clash on the Dunes in Diriyah could be an eye-watering £46million.

This would eclipse the previous biggest payday for a Brit of £20m set by Ricky Hatton when he faced Floyd Mayweather Junior in Las Vegas’ MGM Grand Garden Arena in 2007.
Joshua, 30, earned a career-best £18m for his first fight with Ruiz in June at New York’s Madison Square Garden and his purse for the rematch will completely overshadow that figure.
The Saudi Arabian sporting authorities have paid a site fee of £31million to host the fight in a 15,000-seater, purpose built arena in the UNESCO World Heritage site of Diriyah.

Sky Sports Box Office pay-per-view sales will also swell Joshua’s earnings and the fight is excepted to start around 9:00 pm.

By comparison, Ruiz will only earn around £7.5m, even though he sensationally stripped Joshua of the WBA Super, IBF and WBO belts by demolishing him inside seven rounds to become world champion.

Ruiz’s purse was agreed under the terms of the rematch clause inserted in the original fight contract.

But the Mexican, who fights out of California, will still easily pocket his biggest-ever payday.