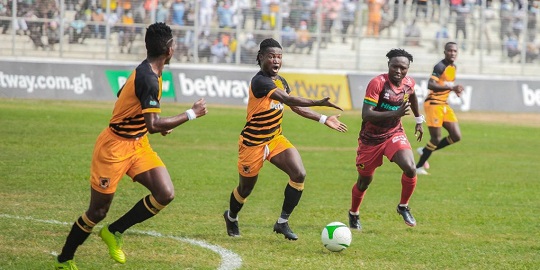 The Ghana Football Association has announced the postponement of the Premier League match-week 29 fixture between AshantiGold SC and Asante Kotoko.

The ‘Ashanti’ derby was scheduled to be played at the Len Clay Stadium in Obuasi on Thursday, 18th May 2022.

The country's football governing body has announced in a statement on its official website that the match has been postponed due to security reasons.
READ ALSO: Video: 'Disease-stricken' Hearts of Oak beat Gold Stars to go 3rd
“The Ghana Football Association wishes to announce that the Ghana Premier League Match Day 29 fixture between AshantiGold SC and Asante Kotoko has been postponed indefinitely.” the statement reads
“The decision follows an intelligence report and advice from the Ghana Police Service. The Miners were scheduled to play their regional rivals at the Len Clay Stadium in Obuasi on Thursday, May 19, 2022.”
“The Ghana Football Association would announce a new date in due course. Stakeholders are to take note and act accordingly.”
It will be recalled that Ashanti Gold were demoted to Division Two on Monday following their involvement in match-fixing scandal together with Inter Allies.
The Miners were found guilty on several counts including match-fixing and manipulations leading to a ten-year ban of the club president Kwaku Frimpong and eight-year ban of chief executive officer Emmanuel Frimpong.