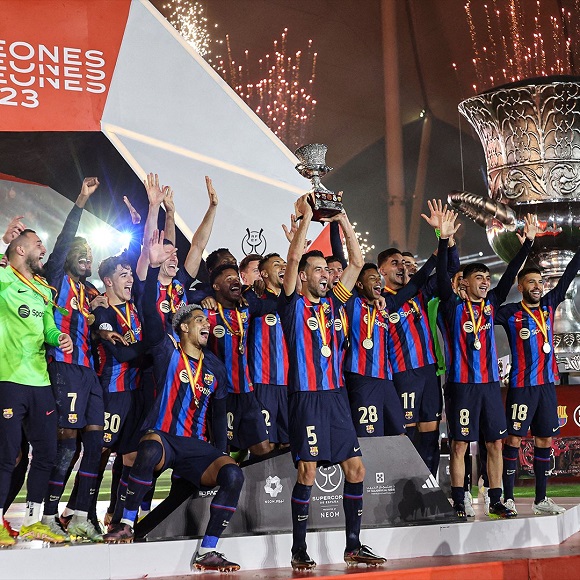 Gavi scored one and set up two more as Barcelona's young stars dominated Real Madrid to romp their way to the Spanish Super Cup trophy with a 3-1 win.

The 2022 Golden Boy put his side in front with a cool finish just after the hour mark after Robert Lewandowski found him in the penalty area, then he turned creator on the stroke of half-time.

Frenkie de Jong pushed the ball through to Gavi on the left flank and the 18-year-old took his time before squaring for Lewandowski to tap home at the far post.

Midway through the second period, the margin was extended to three when Gavi was once more found by Lewandowski on the left and he crossed to the far post where Pedri was there to score.

In truth the scoreline could have been wider as Thibaut Courtois tipped Lewandowski's shot onto the post with the game at 0-0 and then denied Ousmane Dembele with a point-blank stop just into the second half.

Karim Benzema pulled a goal back in injury time, scoring at the second attempt after Marc-Andre ter Stegen saved his first effort with his legs, but the result was already confirmed long before.