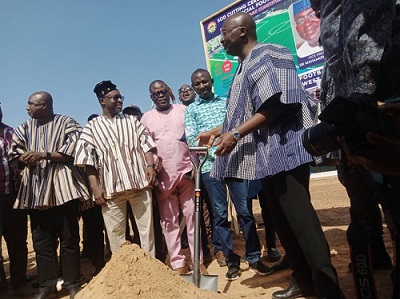 Vice President Dr Mahamudu Bawumia has cut sod for the construction of a $2 million astroturf at Tumu in the Upper West Region.

Measuring 100 by 120 feet respectively, the multi-purpose pitch being sponsored by Ghana Gas will be completed in six months.

Speaking at the ceremony the Vice President stated that the government was doing its best to bring development to every sector of the country, although it sometimes appeared slower than expected and said the needs of the youth was at the heart of government’s agenda.

“As a country, one of our biggest challenges is youth unemployment, so government has paid close attention to this area so that even though the problem has not been solved entirely, the New Patriotic Party government has created more jobs than any other government in the 4th Republic and you can bear witness to this,” he said.

The senior manager for Community Relations and Corporate Social Responsibility at the Ghana Gas, Mr Stephen Donkor, said the astroturf pitch was one of the numerous ways the company would want to support the development of northern Ghana and appealed to the Municipal Chief Executive to monitor the project to ensure it was delivered on time.

In a speech, the Chief of Tumu, Kuoro Richard Babini Kanton IV lauded the project as relevant and said it would provide the youth the opportunity to nurture their talents in sports and enable them to spend their leisure prudently away from social vices.