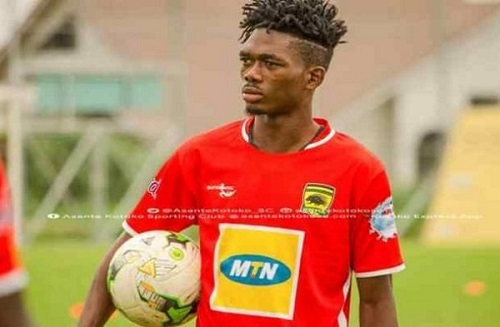 Empem Dacosta is still Asante Kotoko's player after Legon Cities decided against signing him in the just ended transfer window.

The Royals were in talks to sign the defender, but, according to club'sÂ communication officer Kennedy Boakye Ansah, the player is still with the Porcupines afterÂ Legon Cities made a u-turn on their decision.

Speaking to Kumasi based Light FM he said: "As we all know Legon Cities wrote to us about Dacostaâ€™s service, we discussed everything with them. But they came back and told us they are no longer interested in him. So he will remain at our club," he told Light FM.

Asante Kotoko players and technical staff accept have agreed to take a pay cut with football still in limbo due to the Covid-19 pandemic.

Star players such as Felix Annan, Justice Blay and Habib Mohammed along with the club's coaches, have agreed to a 40% reduction in their salaries.

According to the General Manager of the club, Nana Gyambibi Coker the decision to slash down salaries was agreed during a meeting among the players, the technical staff and the management following successful consideration.

"It is something we initially discussed at management level. We considered our situation and our financial strength in containing our expenses and measures to help sustain the club during the suspension of the league due to COVID-19 and we considered pay-cut as one of the measures,"he told Kumasi FM.

"We called the coach and tasked him to engage the players on our behalf and he has reported back to us they have listened to our plea and have accepted a pay cut."

The club joins other teams in the World to have agreed pay cut to help their clubs as the coronavirus pandemic has seen football across the land grind to a halt.