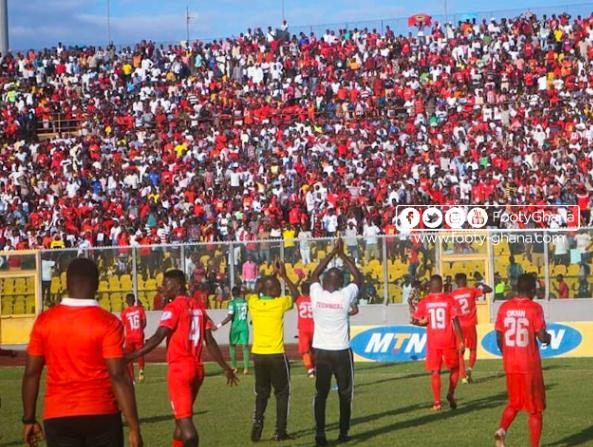 Asante Kotoko Chief Executive Officer George Amoako has revealed that the club will be embarking on a fundraising drive to help offset the $240,000Â FIFA fine.

The Porcupines have been slapped with a $240,000 by FIFA after the final verdict was given on their legal tussle with Esperance over the transfer of Emmanuel Clottey in 2015.

They have until May 10 to cough up the said amount or face demotion.

Reacting to FIFA's fine, the club's CEO has admitted the club's management were not on top of issues with regards to the dealings with the Tunisia club and they will be seeking the help of the teeming supporters to pay the fine.

"...through our intermediary we are aware of the situation and are taking some of steps to remedy the situation, at least to take into account the money we should have gotten from Kwame Bonsu's sale to use it to balance some of the figures but Espernace had other intentions and did not allow it and allow FIFA to apply the regulations. It is unfortunate but as management i think are ignorance with a lot of information about our dealings with Esperance in the first place have resulted in this position," he told Light FM.

So, at this stage we only have to count on the benevolence of Kotoko supporters to help us remedy the situation."

Meanwhile,Â GhanaÂ League Clubs Association (Ghalca) chairman Cudjoe Fianoo has also told Kotoko's management to seek the benevolence of their supporters to pay the fine as his association is incapacitated.

He is also worried about the recent judgement debt the club have been paying.

â€œAs Ghalca chairman, we are worried about the crisis that has entangled Kotoko, but itâ€™s rather unfortunate we donâ€™t have the strength to help, with the Ghana Football AssociationÂ also not well-positioned [to help]," Fianoo told Light FM.

"We simply cannot sit idle for Ghanaâ€™s gigantic club to be relegated.

â€œThey [Kotoko's management] should reach out to their numerous supporters around the world, forget any pain cause by one other, swallow their pride, bury their differences and come together in resolving this issue."

"This will serve as a good lesson for the club [Kotoko] because they have been paying a lot of judgement debt recently," Fianoo added.

â€œI believe Kotoko supporters have that capacity of helping extremely."