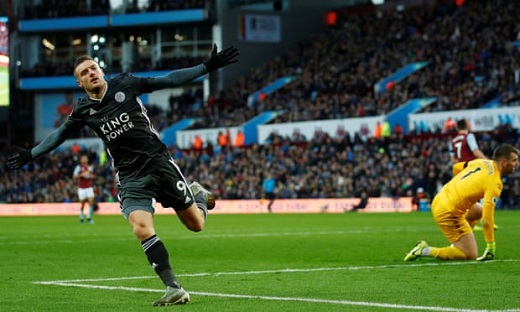 Brendan Rodgers' side reduced the deficit on top spot to eight points once more with a clinical display at Villa Park, in which former England striker Vardy netted for the eighth successive match.

Vardy linked up with Kelechi Iheanacho to open the scoring after 20 minutes, skipping round Villa keeper Tom Heaton and finishing at the second attempt.

Iheanacho added the Foxes' second from close range as the visitors looked to have taken control before the break, only for Villa captain Jack Grealish to whip an effort into the bottom corner on the stroke of half-time.

The hosts' comeback was short lived, however, with Jonny Evans heading in from a corner shortly after the interval.

Vardy then dashed clear with 15 minutes remaining to slide an effort beyond Heaton and put the game out of Villa's reach.

Leicester remain second in the top flight, but now have a six-point advantage over Manchester City after Pep Guardiola's side were beaten by Manchester United on Saturday.

Elsewhere, Newcastle were held to a 1-1 home draw by Southampton whilst Sheffield United travelled to Norwich to win 2-1.