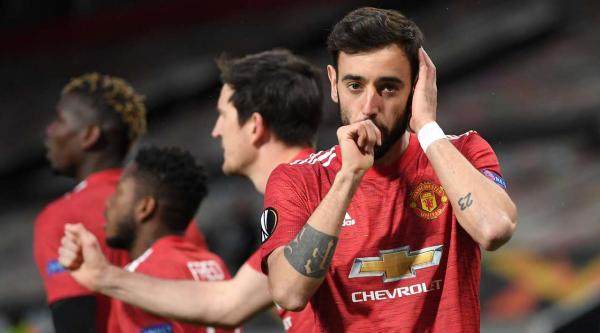 Edinson Cavani and Bruno Fernandes scored two goals apiece as Manchester United came from behind to beat Roma 6-2 in a thrilling first leg of their Europa League semi-final.

Ole Gunnar Solskjaer's side began well and took the lead through Bruno Fernandes' fine finish after trading passes with the Uruguayan.

But the Italians levelled six minutes later when Paul Pogba was penalised for a handball with Lorenzo Pellegrini scoring from the spot.

Despite losing Jordan Veretout, Leonardo Spinazzola and goalkeeper Pau Lopez to injury in the first half, Roma took the lead against the run of play when Pellegrini turned provider to set up former Manchester City striker Edin Dzeko from close range.

Solskjaer chose not to make any changes at the break despite his side looking flat. But his decision was vindicated as they soon levelled in the second half courtesy of a stunning first-time finish from Cavani from Fernandes' weighted pass.

The former Napoli striker grabbed his 12th of the season from close range after Aaron Wan-Bissaka's low shot was parried.

Former United defender Chris Smalling then conceded a penalty with a tackle on Cavani and Fernandes stepped up to rifle home the spot-kick.

Fernandes was involved again for his side's fifth goal with a delicious cross which was headed in by Pogba.

And substitute Mason Greenwood scored the sixth from Cavani's pass to seal the rout to put United in total control going into next Thursday's second leg.