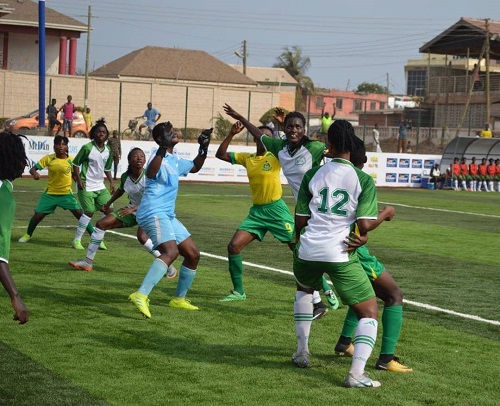 Ghana FA president Kurt Okraku says the initiative to get financial support from the Youth Employment Agency (YEA) for Women’s Football is a "game-changing" move.

Government through the YEA Programme is coming to the aid of the Women's Premier League players in the country for the next six months.

This comes after the GFA reached consensus to enroll players in the Women’s Premier League on the YEA Programme.

Five hundred individuals have been earmarked as beneficiaries – made up of the 30 registered players each from the 16 Women’s Premier League clubs (totalling 480) and 20 other persons in the league.

Each person will be paid five hundred Ghana cedis (GH¢500.00) as a monthly allowance for the next six (6) months beginning from July 2020.

''It was very refreshing and welcoming when the GFA President Kurt Okraku came to see the Agency that he needed support for the various football activities in the country. In fact, I must commend him and the GFA for bringing such a worthy proposal to the Agency for consideration." Kodua Frimpong told the Ghanaian media.

''Upon meeting with him together with the Board Chairman of the agency, we deliberated on it and made further consultation with the Ministry of Youth and Sports whereby we decided to expand the proposal from the Ghana Football Association to include other disciples because we didn’t want to restrict ourselves to only football.

''We thought about it that the moment we attend to the GFA, Ghana Olympic Committee and others will come and demand that it must also apply to them. In the nutshell, we decided to meet the mother body, the National Sports Authority to have discussions and deliberations on how best the Agency can support our young men and women who have taken sports as their profession, lawyer  Kodua stated.

Meanwhile, representative of women’s football on the Executive Council, Madam Habiba Atta Forson, expressed joy and thanked government for coming to their aid.

“It is such a piece of exciting news for women’s football. The initiative from YEA has been given to the women by the Executive Council. So this time around, we are going to give some kind of employment packages to our women,” she stated.

Madam Habiba Atta noted that “this intervention will benefit our women a lot. You know, in women’s football we don’t have paying spectators and so there is no money. This is going to help the players and the clubs a lot.”

“I want to say a big thank you to government, the Executive Council and the President of the GFA, Kurt E.S OKraku for helping us to get this kind of support,” she also added.

Youth Employment Agency (YEA) is a government wing set up by law to provide jobs and create employment opportunities for the youth of Ghana.

The 2019/2020 Women's Premier League season has been suspended since mid-March after the government imposed banned on public or social gatherings.