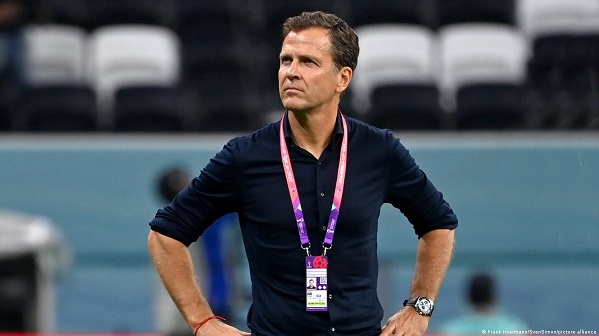 DFB director Oliver Bierhoff has prematurely ended his contract with the German national soccer federation. The announcement comes after Germany's group stage exit from the World Cup in Qatar.

"I am clearing the way for a new direction," Bierhoff said.

The decision comes after Germany exited the 2022 World Cup in Qatar in the group stage, with the national soccer management facing immense criticism.

What did Bierhoff say?

The 54-year-old thanked people who had supported him "during this time with their commitment, ideas and passion." However, he realized the performances of the German men's national team in Russia and Qatar failed to live up to earlier successes.

"That's why I'm not leaving without necessary self-criticism. Over the past four years, we haven't managed to build on earlier successes and give the fans reason to cheer again," Bierhoff said in his resignation speech on Monday evening.

"Some decisions we were convinced of have not turned out to be the right ones. No one regrets that more than I do. I take responsibility for that."

Despite resigning from his position at DFB, Bierhoff had no doubt that soccer would continue to be a part of his life: "Soccer has shaped my life and will continue to accompany me. It has been a great honor for me to have worked for German soccer for so long."

"Oliver Bierhoff has rendered considerable services to German soccer in the 18 years he has been active," the Borussia Dortmund CEO told German sports news agency SID on Monday evening.

During his time as a professional footballer, Oliver Bierhoff was one of Germany's most famous national players, scoring 37 goals in 70 international matches. He was part of the team to win the European Championship in 1996 and helped secure the trophy by scoring two goals in the final game.

In 2004, two years after his last international match, he started working at DFB as manager of the men's national team. During his time at the organization, the German men's national team reached the semifinals or higher at six World Cup and European Championships in a row, triumphing by taking home the World Cup title in 2014.

However, since then, the team's performance at international tournaments has dropped drastically.

What happens next?
There are reports of Watzke himself taking on more responsibility for the national team in the future, however, Bierhoff's succession remains unclear for now.

It was not immediately clear how Bierhoff's resignation could impact Hansi Flick's future as national coach.

DFB president Bernd Neuendorf, coach Hansi Flick and vice-president Hans-Joachim Watzke are scheduled to hold a meeting this week in which they analyze reasons for why the men's national team delivered so poorly in Qatar.