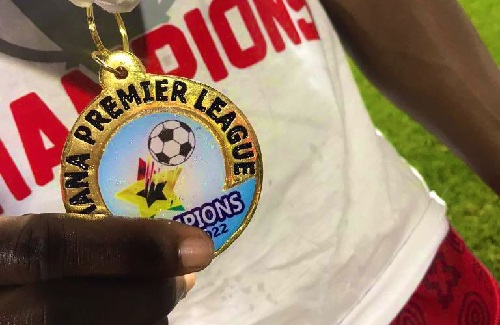 GFA General Secretary, Prosper Harrison Addo says that the medals handed to the Asante Kotoko 'are handcrafted medals made in Ghana.'

The medals, which were shared on social media by unhappy football fans have been the talk of town despite a good 2021/22 season for Kotoko.

Some fans believed the country's football governing body could have done a better job as compared to what some Ghanaian universities have been giving their students on graduation day.

Last season, the quality of Hearts of Oak’s championship medals was also called into question and the GFA vowed to improve, by contracting a local blacksmith to produce this year’s winners’ medals.

In an interview with Citi Sports, Prosper Harrison Addo said the GFA used local artisans for the medals because they wanted to show support to the local industry.

“These are handcrafted medals made in Ghana. People need to get hold of one of the medals and have a good feel of it to know the quality it’s made of and appreciate the handiwork of the Ghanaian visual art students.

“Any other medal you see that people are touting on social media; we’ve called all the people and they cannot make them here. They are all imported. All the university ones that you see are all imported from China.

“The policy of the GFA this year is to support local industry. We cannot pay lip service to supporting local industry and be importing everything from outside the country,” he told Citi Sports.

On the matchday, Kotoko smashed Elmina Sharks 3-0 at the Baba Yara Sports stadium as they were crowned Champions of the 2021/22 Ghana Premier League.

Check out some fans' comments on social media

The FA had an entire year to plan after the Hearts of Oak medal fiasco and emerged with this roughly cut medal finished with oil paint and its supposed to be thumbs up?

Placing it in a box and taking nice photos changes nothing

An improvement from last season's medal. Kudos @ghanafaofficial now time to increase the prize money and get a headline sponsor for us next season. 🙏🏿 pic.twitter.com/rRgWxFR6QO

@Fentuo_ is this what you said is some great stuff? This is a keyholder not a medal. 😂#scorecard pic.twitter.com/SIV4OYp71R

Monday morning and the question od the quality of the medal handed out to Kotoko had come back on the table. Yes it's an improved one from last year but is it quality? #Ghana #Medals pic.twitter.com/OopGHJM3YL

Rate this GPL winners medal out of 10😁#GPLwk33 #3Sports pic.twitter.com/qy6mn6FN6K

Y’all saying this kotoko medal is better and an improvement on what Hearts received last year is the reason the GFA will keep going on this mediocre tangent…Absolute bollocks🥷🏻 pic.twitter.com/uLoN3Q3ND8