I haven't been fair on Eddie Nketiah - Arsenal boss Arteta 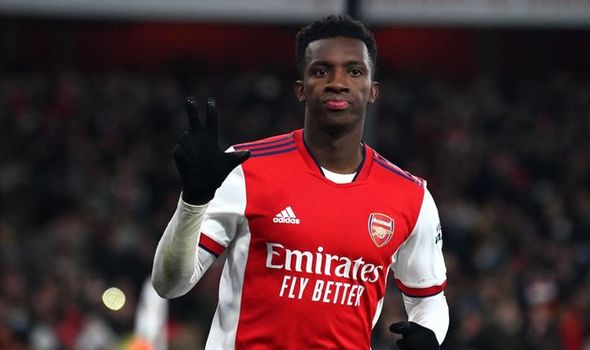 Arsenal manager Mikel Arteta says he "has not been fair" on Eddie Nketiah after the latter scored twice in a rare start to stun Chelsea.

The 22-year-old, who is out of contract this summer, produced two fine finishes at Stamford Bridge in only his second Premier League start of the season.

He expressed frustration at his lack of game time and questioned his future in an interview earlier this week.

"I should have been playing him more," Arteta told BBC Sport.

The Gunners have been in talks with Nketiah over a contract but the striker suggested he wants assurances about regular first-team football before signing a new deal.

"There have been talks and offers of a new contract but at the moment my aim is to play football and play regularly," he told The Beautiful Game podcast.

"That's my ambition and that's what I hope to do but at the same time I'm at Arsenal, I love Arsenal."

The former England Under-21 forward has made just seven starts this season, with Saturday's match at Southampton his first in the Premier League.

Meanwhile, Eddie Nketiah has left the door open for a possible switch from England to Ghana.

The player can feature for either Ghana by virtue of his parents or can play for England to complete the journey with the Three Lions since he has worn their colours all through youth level.

Nketiah’s name has surfaced in conversations concerning the Black Stars after the team booked its ticket to the 2022 World Cup in March.