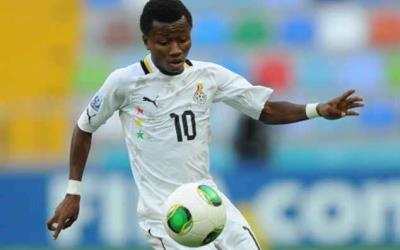 Clifford Aboagye has opened up on his career path so far and says he isÂ grateful than regretful.

The former Inter Allies player has been tipped to be the next big thing for Ghana football having starred in the FIFA U-20 tournament in 2013.

READ ALSO:Â We have not signed Sulley Muntari - Hearts of Oak

However, 25-year-old is still yet to realise his full potential since the FIFA tournament.

Speaking on Instagram with Juliet Bawuah, the midfielderÂ said: Ghanaians are expecting me to be playing in one of the big Leagues in Europe and so far as I have the talent, I believe with hard work I can break through. I am rather grateful and not regretful.

Aboagye was named the Bronze Ball winner of the 2013 tournament with Manchester United's Paul Pogba picking up the Golden ball and the former believes that despite his slow career progression all hope is not lost.

People are thinking I should be at par with my colleagues I played the World Cup without when I back I feel I should be grateful. I feel it is a gradual process and I have a lot of years ahead of of me to continue my career.

AboagyeÂ featured forÂ Ghana in the 2013 FIFA U-20 World Cup aiding the West Africa nation to a third place finished.