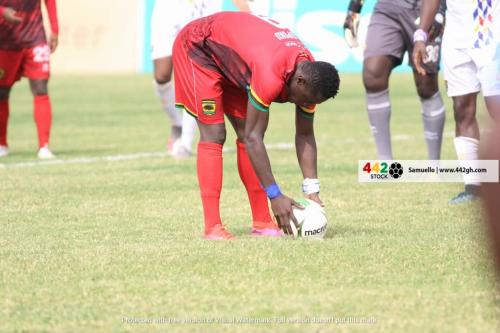 Asante Kotoko assistant coach Johnson Smith has clarified why the club's number 1 penalty kicker Naby Keita did notÂ strike from the spotÂ against Hearts of Oak.

According to the trainer, the Guinean import, who has been dispatching the club's penalty which ease relinquished the spot-kick duties to his striker partner Kwame Opoku because of his failure from the spot in the CAF Confederation cup against ES Setif in Accra.

Opoku, however, failed to put Kotoko ahead from the spot.

â€œFor a penalty kicker we say this guy is good. The guy who took the penalty last time is the same person who always takes our penalty but what happened is that, because he of his miss the other time he decided to leave it to Kwame Poku.â€

â€œFor us, we told them that any person who is confident of scoring should take the ball. In our team, Keita is the penalty takerâ€ he said.

Despite both sides creating numerous chances they failed to find the back of the net as the game ended 0-0 at the Accra Sports Stadium.

The Porcupines started the game brightly as theyÂ had a penalty within a minute of kick off after Kwame Opoku was brought down in box by Nuru Sulley and referee Selorm Yao Bless pointed to the spot.

Hearts of Oak in the second half also had a penalty when Isaac Mensah was brought down by goalkeeper Razak Abalora in the box. Unfortunately, Mensah saw his spot-kick saved by the goalkeeper as the game ended 0-0.

Johnny Depp re-signs with Dior as face of Sauvage Cologne