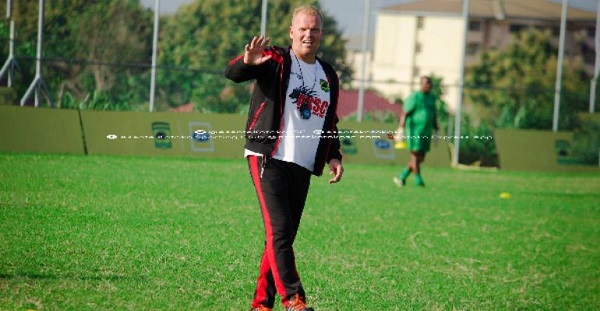 Charles Kouadio who is the agent of Asante Kotoko coach Kjetil Zachariassen has insisted that his client has no intention of resigning from his post unless the Porcupines terminate his contract.

According to Charles Koudio, his client is bent on honouring his three-year mandate given in July this year.

Charles Koudio comment comes in the wake of Asante Kotoko's exit from the CAF Confederation Cup. The Reds hope of making a second successive return to the Group Stage of the CAF interclub competition hit a snag after the Ivorians defeated them 2-0 at the Houphouet Boigny Stadium in Abidjan.

The team arrived on in Ghana on Monday without their head coach. According to Kouadio, Executive Charmain of the club, Dr Kyei tasked him to inform his client that his safety cannot be guaranteed on their return home.

Speaking to Kumasi-based Oyeerepa FM, he said contrary to media reports that his client is missing is a figment of one's imagination.

"Management of Asante Kotoko asked me to tell the coach that they cannot guarantee his safety so he has left to his house in Abidjan.

It's not true he is missing but rather Dr Kyei and Nana Coker told me I should tell him they can't guarantee his safety looking at what has happened and what the supporters did."