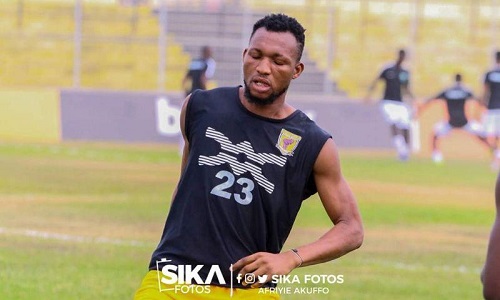 Asante Kotoko have suffered a setback in the pursuit of Latif Anabila as the midfielder has confirmed he is set for a contract extension with Ashantigold.

The midfielder has disclosed that his representatives are in advanced talks with the Miners over a contract extension as his current deal expires soon.

READ ALSO:Â GFA to apply to FIFA to open another transfer window after Covid-19 pandemic

The 22-year-old has been strongly linked with a move to Asante Kotoko in the ongoing transfer window with media reports suggesting a move is imminent.

However, the former New Edubiase star insists such reports are untrue and he is currently engaged in contract renewal talks with his current employers.

"My contract with AshGold will soon expire, but Iâ€™ve been approached by the management led by â€˜Championâ€™ (club president) for a contract renewal which negotiations are still ongoing," he told Otec FM.

â€œI will assure AshGold Supporters to stay calm because Anabila is not going anywhereâ€ he stated.

Anabila has been in fine for the Miners so far,Â helping the club to fifth place in the suspended Ghana Premier League.

AshantiGold defenderÂ Mubarik Yussif has named the toughest striker he has come up against this season.Â

The defender has been a rock-solid for the Miners as they have one of the best defence in the league this season. They lie 5th on the log with 25 points.

After 15 matches in the suspended Ghana Premier League, the defender has come up against some tough strikers.Â

â€ All the strikers are tough and difficult to play against. I didnâ€™t find it easy against all of them but stopping Yahaya Mohammed was the difficult of all."

Yussif Mubarik this season became the first player to win AshantiGold's Player of the Month after beating off competition from goalkeeper Frank Boateng, James Akaminko and Mark Agyekum.

It is an award introduced by a section of AshantiGold fansÂ in a way to motivate players in every game they play.