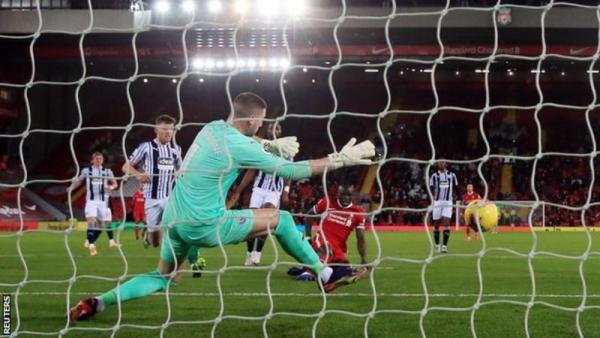 Jurgen Klopp's side looked to be going five points clear at the top of the table when Sadio Mane chested down Joel Matip's long ball forward and fired past Sam Johnstone.

Liverpool dominated for long periods without adding to their lead but the Baggies improved after the break and equalised in the 83rd minute.

Ajayi leapt high above the home defence to send a header in off the post to spark jubilant celebrations from the away team at Anfield.

West Brom keeper Johnstone made a superb save to deny Roberto Firmino a winner near the end.

Meanwhile, Romain Saiss produced a header that watching Wolves team-mate Raul Jimenez would have been proud of to deny Tottenham victory at Molineux, and a place in the top-four.

But, just as it appeared their dominance would earn no reward in the continued absence of Jimenez - attending a game for the first time since fracturing his skull at Arsenal at the end of November - Wolves struck an equaliser.

Morocco defender Saiss met Pedro Neto's corner at the near post with a superb glancing header to steer the ball past Hugo Lloris.

It was the least Wolves deserved after their efforts at shackling Harry Kane and Son Heung-min.

Spurs' star duo rarely got a clean sight of goal and, although Sergio Reguilon might have made the game safe for Tottenham, they paid the price for retreating too far into their shell.

After the game, Mourinho said it was never his intention to defend the slender lead and instead questioned his players for not showing more ambition to go for more goals.

Mourinho added: "We are frustrated with the result. We had control of the game, but we had 89 minutes to score more goals and we didn't.

"It was not just about not scoring goals, it was also about not being dangerous and not being ambitious. For me, that's the problem."

Tottenham, who would have gone third with the win, move to fifth, splitting the two Manchester clubs, who both have a match in hand.

Wolves are 11th and might have won it in the final minute of injury-time when Fabio Silva headed straight at Lloris.