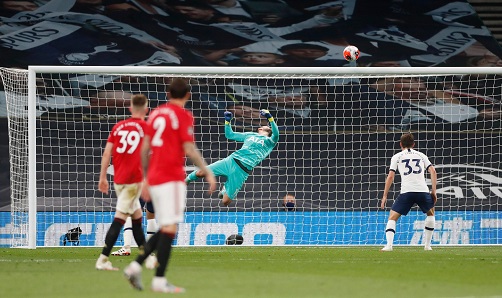 Bruno Fernandes converted a late penalty won by Paul Pogba to secure Manchester United a 1-1 draw away at top-four rivals Tottenham on Friday.

Steve Bergwijn's 26th-minute opener appeared set to give Jose Mourinho a much-needed victory over his former employers as Spurs aim to make a late charge to qualify for next season's Champions League.

However, United were rewarded for an improved second-half display with an equaliser, Pogba - on as a substitute as he returned after a long injury lay-off - producing a burst into the box that tempted a rash challenge from Eric Dier.

Fernandes showed excellent composure to fire home from 12 yards out, sending Hugo Lloris the wrong way, as the visitors extended their unbeaten run in all competitions to 12 games.

It appeared the Portuguese would have the chance to score again from the spot when referee Jonathan Moss adjudged he had been fouled by Dier, but a VAR check reversed the on-field call.

In the other match, three second-half goals from Southampton condemned Norwich to their fourth defeat in five games, denting their hopes of Premier League survival.

Norwich looked lacklustre at an eerily empty Carrow Road, and Nathan Redmond confirmed a win for Southampton against his old club when he slotted into the bottom right corner late on.

The Canaries remain bottom of the table following a 104-day absence.

And the time away from Premier League action, due to the coronavirus pandemic, did little to spark any signs of a comeback from Norwich, who have just eight games to claw back a six-point deficit on 17th-placed Watford above the relegation zone.

In the Premier League era, no team with 21 points or fewer after their 30th game of a season has survived the drop.

It was a positive performance from Southampton, who capitalised on the break, pressing high and taking advantage of space in behind the Canaries' defence.

The Saints move up into 13th place, and have opened up a 10-point gap on the bottom three, having played a game more than those hovering around the safety mark.