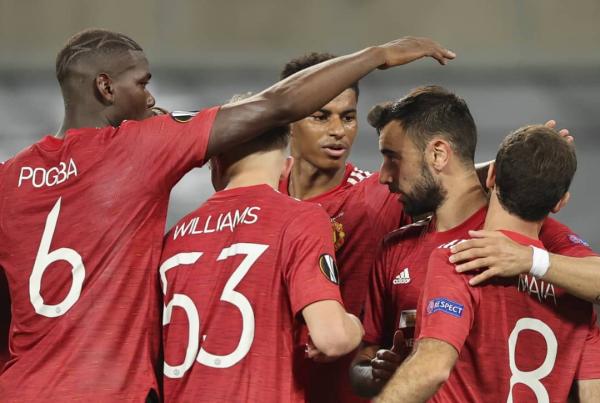 Europa League specialist Bruno Fernandes did the trick for Manchester United - with a penalty winner when they dominated extra time.

Having looked out of sorts and increasingly tired in an even 90 minutes, United were then rampant.

And on 95 minutes Fernandes thumped home his seventh in nine Europa League ties this season after Anthony Martial won a soft spot-kick that was confirmed by VAR.

Yet in the opening 45 minutes United struggled t create, when Copenhagen often looked both the hungrier and more organised side. In fact, only Eric Bailly's fine block denied Mohamed Daramy six yards out.

Harry Maguire was then ruled offside on VAR when United thought they were in line for a penalty. Mason Greenwood's fiercely-drive half-chance and a fine pass from Fred that almost put in

Marcus Rashford offered better. But it was a surprise when United took the lead on half-time - or appeared to have done so,
Greenwood drilled home clinically into the far left corner, spinning onto his head to celebrate near the corner flag.

Copehangen defended stoutly, while looking livel on the counter-attack through Falk Jensen. And for United Rashford fired an optimistic effor high late on in a largely even 90 minutes as both sides tired.

Greenwood was the surprise choice to be taken off for the extra half-hour, having looked the striker most likely for Ole Gunnar Solskjaer's men - with Juan Mata coming on down the right.

But in reality it was Rashford, Martial and especially Mata who did most to fire United up. Spaniard Mata was involved in a build-up that ended with Martial tumbling easily, enabling Fernandes to convincingly bag his fifth penalty for United, low to the left corner.

In the other game, Inter Milan beat Bayer Leverkusen 2-1 to book qualification to the semi-finals of the competition.