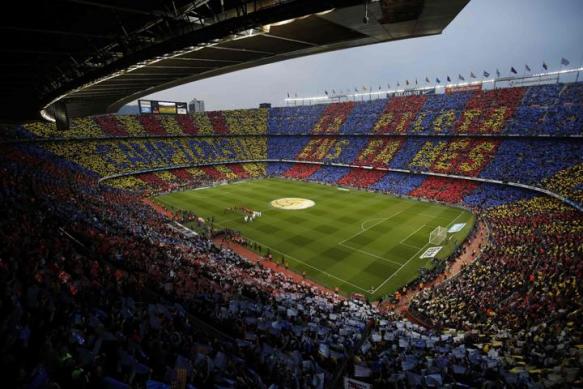 The LaLiga champions announced this week they will sell the naming rights for the first time in their stadium's 63-year history.

Barca will then donate the money to fund "research projects and the worldwide fight against the coronavirus pandemic".

Billionaire David - who runs aÂ CBD (cannabidiol) business with friend and ex-heavyweight champion TysonÂ - believes he is in a good position to win the naming rights after entering negotiations with the Spanish giants.

He said: "This is an opportunity that I am bullish about. It is an historic moment in the history of sport and it fits well with my current plans.

"Contact was opened at the start of the week and I am quietly confident the deal will be secured.

"This deal with the Nou Camp is another way to help. It is full of all the energy that Barcelona stands for.

"My health company has been working hard with top virologists, including the UK's Dr Dorothy Bray, to look at any way we can hit this virus."

David is worth around Â£2.6billion and owns companies such as FilmOn, home-shopping website 9021go.com and streaming-video site BattleCam.com.

As well as appearing in various Hollywood films, he is alsoÂ the heir to the plants which bottle Coca-Cola.

He said: "I have no criminal record, despite last year's fun in St Kitts and various money-grabbing attempts in other meaningless civil claims.

"My record is as clean as it gets among the big hitters in the business world.

"Barcelona and Alki David would be a beautiful partnership."

The 51-year-old was arrested on the Caribbean Island of St Kitts in May last year after more than Â£900,000 worth of cannabis was allegedly found on board his private jet.

Despite the incident, David insists his "record is as clean as it gets" as he plans for a "beautiful partnership" with Barca.