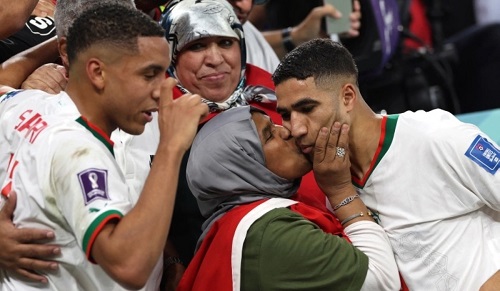 After Morocco shocked the footballing world by defeating pre-tournament favourites Belgium 2-0 in a Group F play, Paris Saint-Germain fullback Achraf Hakimi made a beeline for his mother in the stands.

Their embrace and subsequent cheek-pinch went viral across social media platforms. The 24-year-old footballer later posted an Instagram photo of him planting a kiss on his mother’s forehead with the caption, “I love you, Mom”.

But Hakimi’s mother is not the only Moroccan football parent who has travelled to Qatar to support her son at the 2022 World Cup.

On the instructions of coach Walid Regragui and Royal Moroccan Football Federation president Fouzi Lekjaa, family members chosen by all Moroccan squad members are entitled to an all-inclusive trip to Qatar.

As a result, Morocco’s base at the Wyndham Doha West Bay hotel occasionally feels like an adorable parent-run summer camp. For some, like Regragui’s mother, Fatima, the trip was a once-in-a-lifetime opportunity.

“During his whole career as a player and as a coach, I never travelled to watch him,” she told Moroccan sports channel Arriyadia. “I’ve been living in France for more than 50 years now and this is the first competition that I left Paris for.”

Whenever television boom microphones have been shoved in their faces, the proud parents of Moroccan players have gushed about their children and how they consider all of the “boys” on the squad as their very own.

Apart from heart-warming social media posts, creating positive energy is part of Regragui’s strategy of obtaining intangible advantages that will translate on the pitch. He said as much immediately after taking the job, at the Mohamed VI Complex in Maamoura, when he declared: “Our success is not possible without our parents’ happiness.”

Morocco are no favourites in this World Cup, but by reaching the round of 16 for the first time since 1986, they have already thrilled their fans and families. They have also emerged as a team many neutrals are rooting for — emotional scenes like Hakimi’s with his mother likely help.

But there is another element to the magic potion that is carrying Morocco’s hopes: the droves of Moroccan supporters who have made Qatari stadiums their second home.

At least 15,000 Moroccans live in Qatar and several thousand more, from all over the world, have made the trip to the first Arab-hosted World Cup, generating intimidating atmospheres for opposition teams in each of their group-stage matches.

Perhaps the most pertinent example of home support helping the Atlas Lions came in the final stages of the match against Belgium. After taking a 1-0 lead with 15 minutes to play, Morocco prepared to absorb pressure and launch counterattacks. Had the World Cup been in Europe or South America, where there would have been markedly less home support in attendance, those 15 minutes could have felt like an hour.

Instead, a cacophony of whistles and boos rained upon the Belgian players at Al Thumama Stadium whenever they took possession of the ball. Cathartic roars erupted from the stands whenever the ball was cleared.

“I swear to God if the supporters weren’t here, we wouldn’t have advanced to the next round!” Regragui exclaimed, after the final match of group play.

Combine the pressure that Moroccan supporters have doled out on the opposition in Qatar with the scientific evidence pointing to the higher testosterone levels that home teams enjoy, and the North African side has had plenty to thank their supporters for.

Sure, that does not take away from the quality of the players themselves, who have outperformed other Arab sides in the World Cup. But before their round-of-16 clash versus Spain, demand for tickets has been so high that the Moroccan football federation procured an extra 5,000 tickets for supporters.

Draped in their regal red flags and armed with darbuka goblet drums, Moroccan supporters will likely turn Education City into another home venue on Tuesday evening.

Leaning on the diaspora

There is a quarter-final berth on the line, but there is also a deeper sociological context that undergirds Morocco’s clash with Spain.

After facing off against Belgium, Morocco will be playing against a second Western European country with a sizeable Moroccan diaspora. In all, 137 players at the 2022 World Cup represent a country different from the country they were born in.

That includes 14 of the 26 players in Regragui’s squad — making Morocco the most reliant on diaspora talent of the 32 nations competing in Qatar.

Yet while such a scenario could in theory complicate team chemistry, since players have different upbringings, this mishmash of birthplaces appears to have worked for Morocco. One reason, according to parents of the players: Those in the diaspora are possibly even bigger fans of the Moroccan national team than some at home.

At the Wyndham last week, many of the players’ parents boasted about their children’s passion for the national team and their decision to represent Morocco instead of seeking to play for the country of their birth.

Striker Zakaria Aboukhlal’s father, Tarek, said: “He’s [Zakaria] born in Holland, and he has everything he needs there, but our blood is Moroccan.”

Midfielder Bilal el-Khannouss’s father was even crisper in articulating why his Belgium-born son chose to play for Morocco. “His heart spoke to him,” the father said.

Immediately after securing qualification to the round of 16, Regragui, who was born in France, admitted that he had been thinking of the 1986 World Cup, when the team last made it out of the group stages. “At the time I was living in the French suburbs, and when Morocco beat Portugal, it was the happiest I’d ever been in my life,” he said.

Now his team is on the verge of climbing new heights: A place in the World Cup quarter-finals would be unprecedented. Spain will be the bookies’ choice, yet Morocco have shown the world what they are capable of during this tournament.

The mommy love is helping.