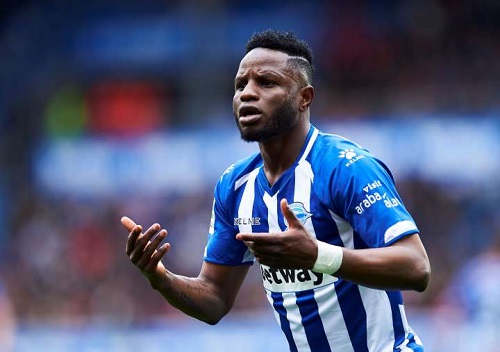 Deportivo Alaves midfielder Mubarak Wakaso will be going under the knife after injuring his right hand while in action for his club in matchday 12 of the Spanish La Liga.

The Ghana midfielder injured his right hand while playing in his outfit's 4-2 loss to Osasuna, despite the injury he played the full 90 minutes.

However, a publication from his parent club in Spain has revealed that 29-year-old Tamale-native has suffered an injury.

"Wakaso Mubarak suffered a fracture in the metacarpus of his right hand as reported by IMQ, official insurer of the Baskonia Alaves Group," Alaves have published on their official website.

"The Ghanaian player will undergo a microsurgery tomorrow and is expected to return to training during this week.

"The club will be informed about his progress on a daily basis."

Wakaso has been a key part of Alaves' set-up this season, having featured in all but one of their 12 league games played so far. He started in all those games.

He has been invited by Kwesi Appiah for Ghana's double-header for AFCON 2021 qualifiers.

Ghana will host Bafana Bafana of South Africa at home on Thursday, November 14 at the Cape Coast Stadium, before travelling to São Tomé and Príncipe to face them on Monday, November 18.

His chances of coming to play for Ghana in the doubleheader depends on the outcome of the surgery in the coming days.