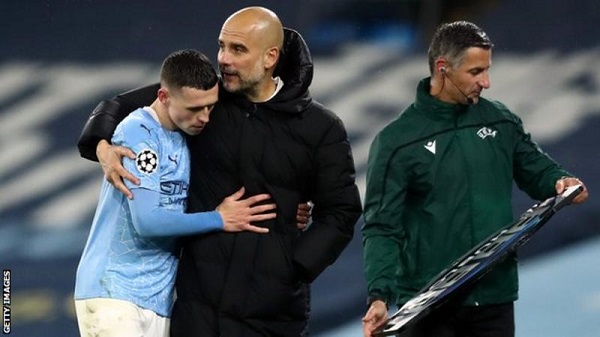 The Blues are one win away from a third league title under Guardiola but he had failed to steer them past the quarter-finals in Europe until this season.

"This is remarkable," said Guardiola.

"People believe it's easy to arrive in the final of the Champions League. Getting to the final now makes sense of what we have done in the past four or five years.

"Every day these guys have been consistent. We scored a goal through the hips [of the defensive wall] in the first game, and today Marquinhos hit the bar in the first half - you can be out for little details.

"Manchester United won a title because of John Terry's slip and scored in the last minute against Bayern Munich and Real Madrid won a title against Atletico in the 93rd minute. It's a competition that is so difficult and something in the stars is involved in that.

"I want to thank the owner, the chairman and the staff at the club. This club is about all the people that work behind the scenes, it's not just about money. If you want to think that then you are wrong."

Guardiola's side have been knocked out in the quarter-finals in the past three seasons by Lyon, Tottenham and Liverpool and lost in the last 16 to Monaco in his first campaign in charge.

They are playing in the Champions League for a 10th successive season and had only once before reached the semi-final stage, losing 1-0 over the two legs to Real Madrid in 2015-16 when they were managed by Manuel Pellegrini.