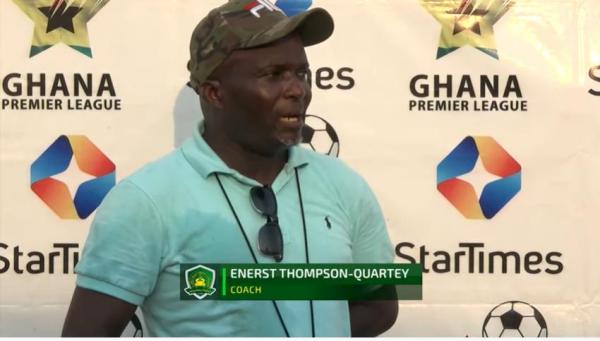 Ebusua Dwarfs coach Ernest Thompson says his outfit should have carried the day against Eleven Wonders in the matchday 19 Ghana Premier League fixture.

The Crabs were held to a 1-1 draw against the Techiman-based side on Friday.

Dwarfs took the lead in the 13th minute when Michael Asamoah took advantage of a fine team move to slot home.

But Wonders hit back quickly after the restart as the hosts allowed Clement Boahen to fetch the equalizer two minutes later.

Reacting to his outfit's stalemate, Ernest Thompson did not hide his displeasure with the wastefulness of his team as he maintained the script would have been different.

"I am not happy with the performance of my strikers because if we get such begging chances and we cannot bury them, then I don't know what we are doing on the field," he said.

He added that, they have been working on how to find the back of the net in training and expected his strikers to let the work yield results.Â Â

"We could have won by 5-1 if we were clinical enough. How could we miss such chances?

It makes the work soo difficult because if you play nicely and can't score from the chances you create, it's soo painful.

We want to pick all the points but my strikers were just lackadaisical they were just lethargic in front of the goalposts," he concluded.

The draw took Ebusua Dwarfs points tally to 24 while Wonders jump to 22 points after 19 games.